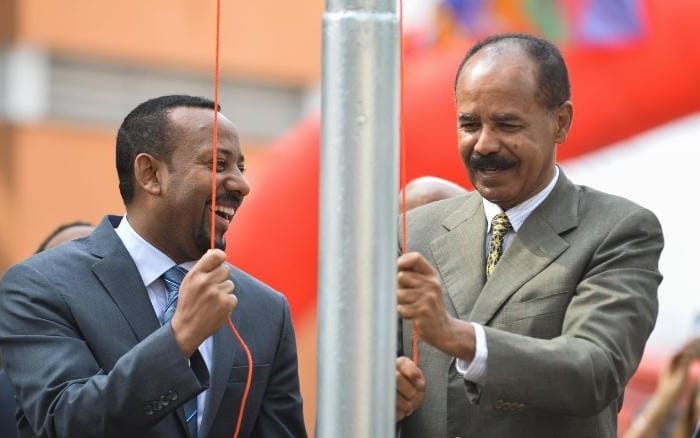 Eritrea and Ethiopia’s leader are continuing to exchange the official visits to the strengthening the peace process between two former sworn enemies. Eritrea has reopened its embassy in Ethiopia, BBC reported.

Eritrea officially opens its embassy’s doors in Ethiopia’s capital, Addis Ababa, as the part of the ongoing rapprochement between the two countries. Both African states have only recently agreed to restore diplomatic ties, even though the conflict ended in 2000. Embassy’s opening was the culmination of Afwerki’s three-day visit to Ethiopia.

Beyond easing tensions in the volatile Horn of Africa, the new relationship also carries economic and security incentives for both countries.

Afwerki accepted the gift of a horse, a shield, and a spear from President of Ethiopia’s Oromia Region, Lemma Megerssa, according to Prime Minister Abiy’s chief of staff, Fitsum Arega.

“… A spear and shield is the most prized possession of an Oromo traditional warrior,”

Arega explained in a tweet while Ethiopia’s information minister, Yemane Meskel said in a tweet that the event was “yet another milestone in the robust and special ties of peace and friendship both countries are cultivating with earnestness in these momentous times.”