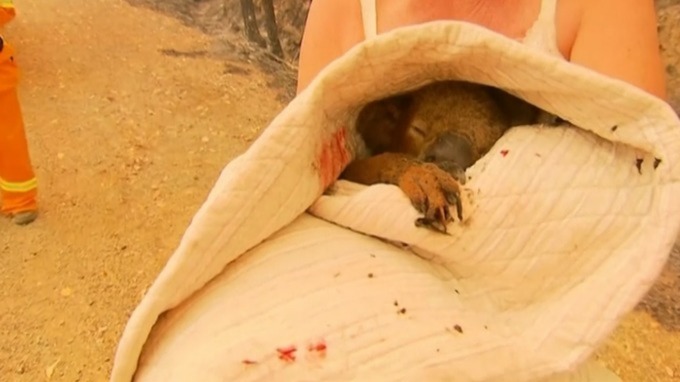 Male koala Lewis has died from its injuries he got in Australian wildfire, ITV reported. The animal was severely burned and suffered from the pain, the vets of the Koala Hospital Port Macquarie said.

Koala Lewis couldn’t fight for his life because of the severe injuries due to burning. Lewis was given water and wrapped in a blanket after being found on a road in the New South Wales state town of Wauchope last week.

The animal was given the constant assessment by the vets at Koala Hospital Port Macquarie but the status of health was too bad. Last week, the vets placed koala under general anaesthesia to assess his burns injuries and change the bandages. Then, out of humanity, the vets made the decision to put Lewis to sleep as his burns took a turn for the worse and would not recover.

“We recently posted that ‘burns injuries can get worse before they get better’. In Ellenborough Lewis’s case, the burns did get worse, and unfortunately would not have gotten better,» the hospital’s statement reads.

Last week, koala Lewis’ rescue made headlines globally when Toni Doherty walked into the smoky forest, describing it as the “natural instinct”.

As ITV reported, another rare koala from Japan has arrived at Longleat Safari Park. A male Burke joined a breeding programme that hopes to save the species.