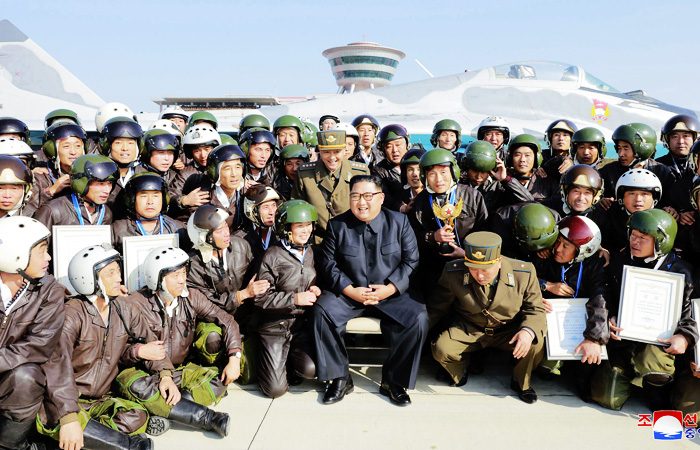 North Korea’s leader attended the military air show, which took place on the east of the country. According to Associated Press, Kim Jong Un praised the combat pilots for high qualification and readiness to fight against enemies “armed to the teeth.”

The demonstration of the skills and defending abilities of the North Korean combat pilots were highly appreciated by the national leader. Mr Kim expressed satisfaction over the performance of his military pilots who displayed the “invincible might” of his flying corps.

The state-run Korean Central News Agency on Saturday followed a slew of statements expressing anger at planned US-South Korea military drills that the North says could derail its nuclear negotiations with Washington.

US Defense Secretary Mark Esper has said the allies could possibly modify the joint aerial exercises to create space for diplomacy. Mr Kim preferred not to comment on the joint plans of Washington or Seoul.

North Korea waits for the US lift the sanction

North Korea’s leader has issued an end-of-year deadline for President Trump administration to offer mutually acceptable terms for a deal to salvage the diplomacy. Otherwise, his North would seek a “new path” if Oval Office persists with sanctions and pressure. Mr Kim added.

This week, on a visit to South Korea, U.S. Defense Secretary Mark Esper told journalists that the allies could possibly modify the joint aerial exercises to create space for diplomacy to resolve the issues with North Korea.

Negotiations between Pyongyang and Washington have faltered since a February summit in Vietnam, which broke down after the U.S. rejected North Korean demands for broad sanctions relief in exchange for a partial surrender of its nuclear capabilities.

Meanwhile, North Korea has been ramping up its missile tests and other military demonstrations in recent months in an apparent attempt to pressure the United States.