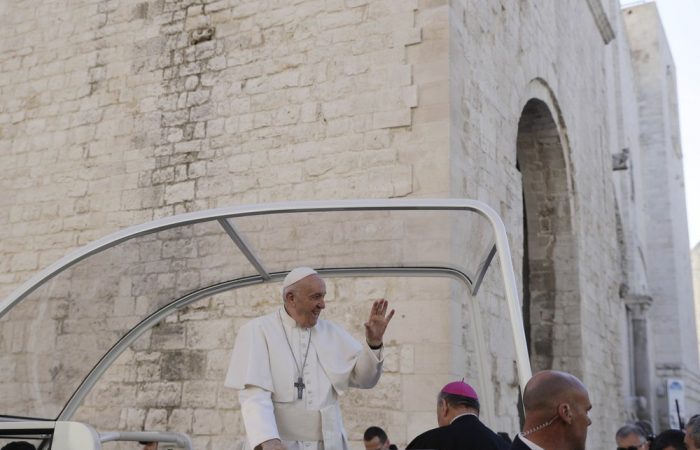 In his traditional Sunday mass, the pontiff has cautioned against poorly-balanced political measures aimed at ending the old armed conflict in the Middle East. As AFP reported, Pope said that the recent Trump plan on how to make friends Israelis and Palestinians is just ‘unfair’.

Pope Francis paid a visit to the Italian southern port city of Bari on Sunday. The travel was aimed at reflecting on peace in countries bordering the Mediterranean Sea, Francis lamented the many areas of war and conflict, including in the Middle East and Northern Africa.

Among the prelates gathered for his speech in Bari’s Pontifical Basilica of St. Nicholas were churchmen from the Balkans, Jerusalem and Algeria.

The pontiff shared his own vision of the Middle Eastern plan elaborated by the White House. Pope spoke of “the still unresolved conflict between Israelis and Palestinians, with the danger of not fair solutions, and, thus, presaging new crises,” commenting on that document.

In his speech regarding the plan, Francis didn’t cite any specific proposals.

A new Trump-Kushner peace plan would let Israel annex all of its settlements along with the strategic Jordan Valley. It would give the Palestinians limited autonomy in several chunks of territory with a capital on the outskirts of Jerusalem, but only if they meet stringent conditions.

In the same speech, Francis took a swipe at populist politics.

“It scares me when I hear some speeches by some leaders of the new forms of popularism,″ he said.

The kind-hearted pontiff also lamented that waves of refugees fleeing conflicts, climate change consequences and other adversity are “depicted as an invasion.”

Face masks in shops will not be mandatory in UK: Gove

Kenya’s only white female giraffe and calf killed by poachers