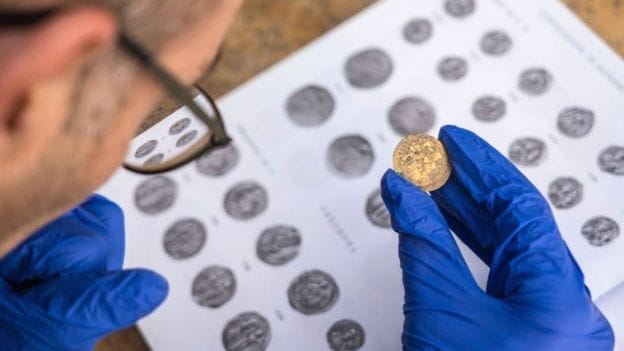 The unexpected discovery was made during an excavation project at the Caesarea World Heritage site, BBC reported. The archaeologists said that a hoard of 24 rare gold coins appears to have been hidden by someone who hoped to retrieve it but never returned.

The researchers believe that the rare coins found in Israel dug in 1101, probably, an owner may have died when the city’s inhabitants were massacred by a Crusaders. The unique collection of gold coins has been hidden over nine centuries ago has been discovered by archaeologists in Caesarea, the port city in Israel,  said the directors of the excavation project, Dr Peter Gendelman and Mohammed Hatar.

Along with the rare cache was found another gold artefact, a single gold earring. The cache dating to the Abbasid and Fatimid periods was waiting for archaeologists in a bronze pot between stones in the side of a well.

“The cache is a silent testimony to one of the most dramatic events in the history of Caesarea: the violent conquest of the city by the Crusaders,” archaeologists from the Israel Antiquities Authority said.

They added that, according to written sources, most of the inhabitants of Caesarea were massacred by the army of Baldwin I, who ruled the Crusader kingdom of Jerusalem between the years 1100 and 1118.

According to the archaeologists, it is logical to suggest that the treasure’s owner and his family perished in the massacre or were sold into slavery, and therefore were not able to retrieve their gold.