Spain set to exhume the remains of former dictator Franco 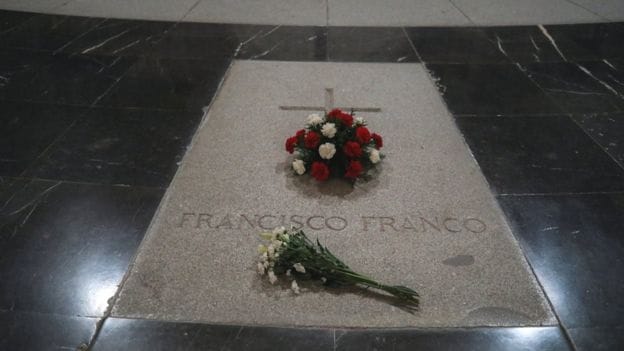 Spain is re-thing its past, the new Socialist government is going to exhuming the remains of dictator Francisco Franco from the mausoleum site where he has been interred for decades, BBC reported.

Today Franco memorial is a place that glorifying his victory in the 1936-39 Civil War but the current socialist government, in power since June, is making good on a promise to relocate the grave. According to the new leaders of the country, Franco memorial is an affront to victims of the Spanish Civil War buried at a vast memorial site dominated by the fascist leader. But it is loathed by many in Spain as a monument to the triumph of fascism. Left-wing Republican prisoners were forced to help build it.

It hopes to transform the late 50s’ Valley of the Fallen, where 34,000 people from both sides of the conflict are interred in unmarked graves, from a divisive flashpoint to a dignified memorial site.

The move is an attempt to heal the scars of Spain’s civil war and the subsequent four decades of dictatorship under Franco – in which hundreds of thousands were killed or brutally oppressed.

While the Socialist Party has parliamentary support for the exhumation from the left-wing Podemos party and from Catalan and Basque nationalists, the Franco family should specify where the remains are to go. if they don’t do it, the final resting place will be decided by the Spanish government.

Exhumation will be a relief for relatives of Republican fighters who were buried, without their family’s consent, next to the man they died fighting. Dictator Franco ordered the creation of the Valley of the Fallen at the beginning of his rule and it was completed in 1958.