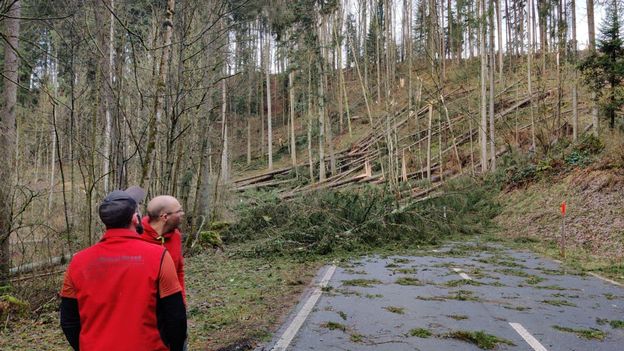 Switzerland’s authorities warn people about the possible consequences of the storm Ciara. On Monday, ferries and flights have been cancelled in Switzerland as the strong wind hits the country, according to the meteorological service, Météosuisse.

Ciara (as known as Sabine in the German-speaking parts of Switzerland) hit the Alpine nation overnight with heavy rains and winds. The most powerful touches of that natural disaster felt the northern and central regions.

As Switzerland’s official weather service, Météosuisse, reported, winds could reach 200 km/h in the mountains. The winds will bring in a cold front, likely until the night of Tuesday to Wednesday.

This morning, gusts of 159 km/h swept through some parts of Bern Oberland, and strong winds were also reported in certain areas around Zurich, Fribourg, and Neuchâtel. The wind with such a high speed caused disruption of services around the country.

Monday morning became the real quest for cross-border workers who commute to their Swiss jobs from France on a ferry across Lake Geneva. They will have to find alternative ways of getting to work next days.

Compagnie générale de navigation (CGN), which operates the ferries, has suspended all services on Monday. The company will decide on Monday at 4pm whether to resume lake crossings on Tuesday.

Storm Ciara made to cancel all flights from Switzerland

In Switzerland, storm Ciara is also disrupting air traffic. Geneva, Zurich and Basel airports have cancelled more than 80 flights, mostly to the neighbouring countries such as UK, Paris, and Amsterdam.

On the other hand, Ciara is not expected to have a major effect on railway traffic, with the exception of some regional lines. In addition, night trains from Switzerland to Berlin and Hamburg will likely be cancelled.

On Monday, Météosuisse has issued guidelines on how to stay safe in the storm. It recommends downloading the MeteoSwissApp to track the storm’s progress.

It also recommends taking protective measures, such as putting away valuable and fragile items; raising the blinds; closing all doors and windows; and placing vehicles in a safe place.