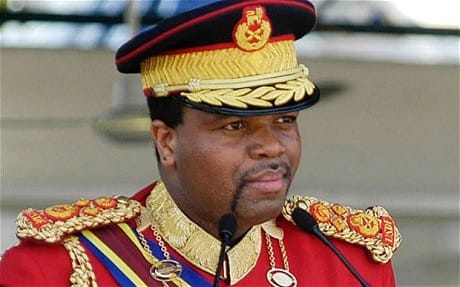 King Mswati III referred to the “Kingdom of eSwatini” several times in recent years including in an address to the UN General Assembly in 2017 and at the African Union, as well as other international conferences. The ruler wants to change the name of his country to Kingdom of eSwatini, New York Times reported on Friday.

Swaziland king decided to mark 50 years since independence from British rule in an original way – by shifting its name. According to King Mswati III, the new name is the ‘Kingdom of eSwatini’, the African country is one of the world’s few remaining absolute monarchs, its ruler is able to do anything he wants. The eccentric King married his 15th wife, all his women attended independence day celebrations at a packed sports stadium in the second city of Manzini when King Mswati III declared the name change:

“I would like to announce that Swaziland will now revert to its original name,”

Last century, upon gaining independence, many African ex-British colonies reverted to their ancient, native names but not Swaziland. Fifty years after, King Mswati III decided to give his country its original name.

“We no longer shall be called Swaziland from today forward,”

King of Swaziland was born on Independence Day

The Golden Jubilee independence celebrations corresponded with King Mswati III’s 50th birthday on Thursday. Ruler’s move on the changing name of his kingdom means automatically a quite a job for the country’s bureaucrats. They will have to amend more than 200 references to Swaziland in the country’s constitution, as well as change the country’s currency — which bears the name of the Central Bank of Swaziland along with images of the King.

The king had used the name eSwatini in recent years, including in addresses to his country’s Parliament, the UN General Assembly and the African Union. He said that Swaziland was reverting to its original name, before the advent of British colonization in 1906.