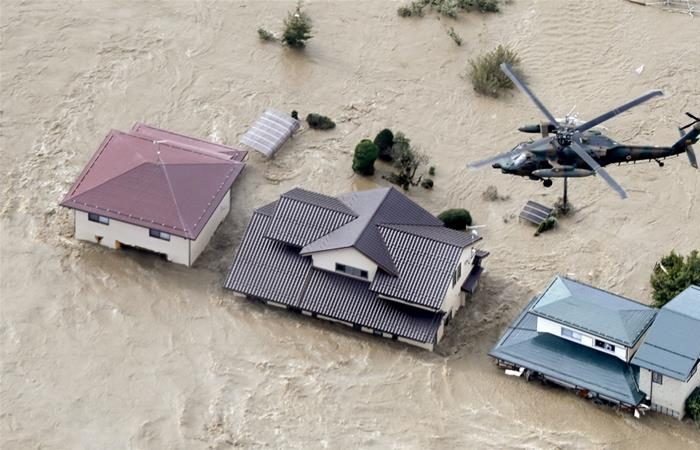 Typhoon Hagibis took lives of at least 19 people in Japan, Kyodo News reported. The massive floodings, landslides and power cuts are the consequences of the scaled natural disaster that touched Tokyo.

In Japan, 16 are still missing after Typhoon Hagibis, the massive flooding killed 19 people. On Sunday, helicopters plucked people from their flooded homes after the landfall south of Tokyo as rescue efforts went into full force in wide areas of Japan.

On Saturday night, Hagibis made landfall south of Tokyo and moved northward, government spokesman Yoshihide Suga told journalists. Meanwhile, 27,000 military troops and other rescue crews were deployed for the operation.

Prime Minister Shinzo Abe offered condolences to the families of those who died and said the government was working to save people’s lives and property.

«The government will do everything in its power to cooperate with relevant agencies to restore services as soon as possible,» promised Abe.

The task force to deal with the damage was created immediately by government, NHK reports. On Sunday morning, tens of thousands of troops and rescue workers to save stranded residents. Hagibis was so powerful that briefly paralyzed Tokyo, causing the scaled floods.

The meteorologists say typhoon Hagibis is one of the worst natural disasters to hit the country in recent history.

On Saturday night, Hagibis left vast swaths of low-lying land in central and eastern Japan inundated and cut power to almost half a million homes.

Landing restrictions at Tokyo’s Narita and Haneda airports were lifted, but more than 800 flights were cancelled for the day. The NHK reports some Shinkansen bullet train services to the worst-hit areas also were cancelled.