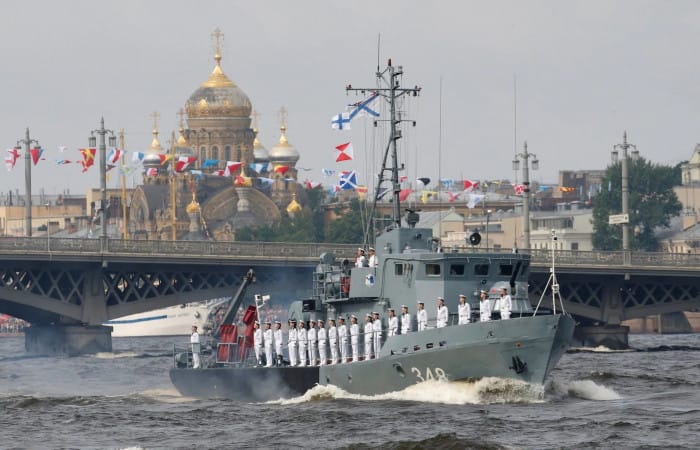 Russia sends the biggest warship to Syria, has released its biggest fleet of warships to the Mediterranean Sea, Telegraph reported. Russian military experts say the fleet, which has vessels carrying Kalibr cruise missiles, will support the Syrian army’s campaign in rebel-held Idlib.

Idlib is the last rebel-held Syrian province that has suffered from nearly three years of conflict. The Russian Navy has deployed its biggest ever fleet of warships to the Mediterranean Sea after the US threatened to use airstrikes against Bashar al-Assad. Such Russia’s move made angry both the US and the UK whose diplomats threatened it ‘will respond strongly’ to chemical weapons are used by Assad’s government in Idlib.

The navy chiefs in St. Petersburg decided to send the mammoth ship after the Kremlin claimed the US and Britain are preparing for a missile strike on Bashar al-Assad. In fact, most of the Russian warships are armed with long-range Kalibr missiles, which could be used to attack ground targets while supporting the Al-Assad regime across Syria. The most recent ship Russia sent to Mediterranian Sea is made up of ten warships and two submarines, with more vessels on the way.

In Idlib, both Russian and Syrian forces deployed, this province is the last major rebel bastion in Syria. The civilian population has suffered from nearly three years of conflict, and Russian humanitarian assistance means a lot to people, as well as the military support.

Speaking at a press conference in Jerusalem, John Bolton said:

“We are obviously concerned about the possibility that Assad may use chemical weapons again. Just so there’s no confusion here, if the Syrian regime uses chemical weapons we will respond very strongly and they really ought to think about this a long time.”

In April the US, UK and France launched joint missile strikes on Syrian targets in response to an alleged chemical weapons attack in the town of Douma. Mr Bolton also insisted the US were not looking to reimpose sanctions on Iran in a bid to oust Iran’s leadership.