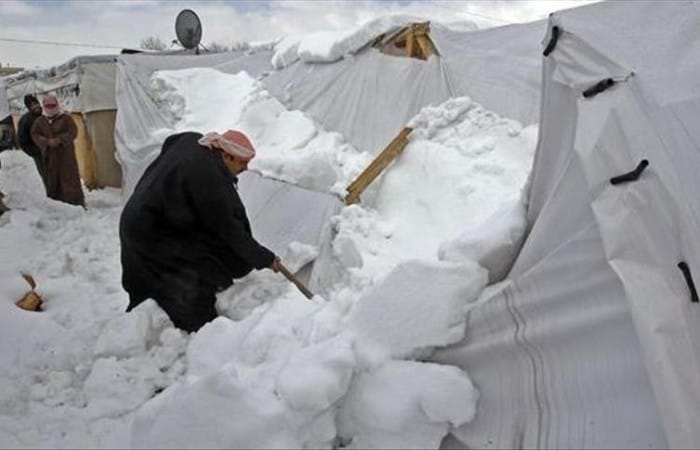 The UN Children’s Fund confirmed that cold weather killed 15 babies in the Rukban camp in southeastern Syria. Thirteen babies less one year old died in camp while remaining two died while fleeing jihadists’ stronghold in the northern part of Syria.

UNICEF regional director Geert Cappelaere said that such a scaled tragedy like in Al-Rukban refugee camp should never repeat, and there are no excuses for this in the 21st century. “The lives of babies continue to be cut short by health conditions that are preventable or treatable,” he said and added that this tragic manmade loss of life must end now.

The surprisingly low for this part of Syria temperature and harsh living conditions in Rukban camp are definitely put children’s lives at risk, UNICEF said. Extreme cold weather killed 15 Syria children in just one month. The isolated desert camp near the border with Jordan is the home for 45,000 residents, 80 percent of which are women and children. The alarming increase od the rate of infant mortality is another worrying issue for UNICEF and other humanitarian organizations operating in this region.

According to the UN, more than 10,000 people have been displaced since December from areas where the Syrian Democratic Forces (SDF) have launched a month-long offensive to expel ISIS cells. Since 2016, the residents of Rukban camp have become particularly acute after neighbouring Jordan closed its border with Syria and declared the area a “military zone”.

Under current circumstances, any humanitarian assistance therefore sometimes takes months to reach the camp. The last successful operation registered in  November 2018 when the aid entered the camp for the first time in ten months. Refugees of all age are still experiencing difficult humanitarian conditions, UNICEF regional reiterates.