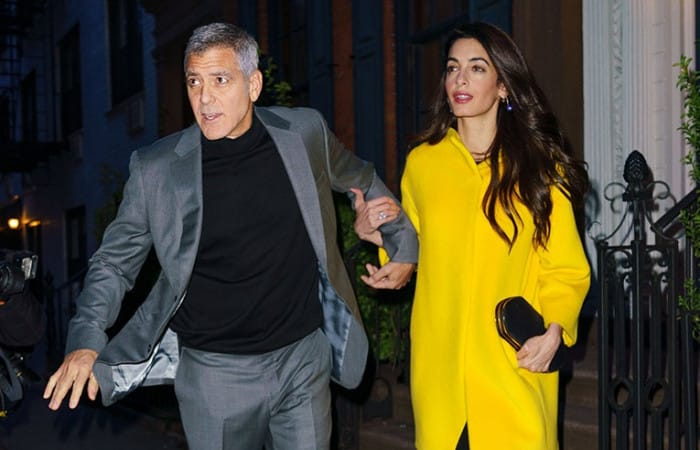 Amal and George Clooney are just the common parents who are happy to reveal the very first words of their very first kids. For both them, Mr and Mrs Clooney, Ella and Alexander are the first children.

The young Cloonsters are starting to speak, said their proud parents. According to Amal Clooney, the kids are trying to speak something like mom and dad. Chatting to Vogue for their May issue, Amal said,

and added that George was very careful to ensure that ‘mama’ was the first word.

The Oceans 11 star has previously opened up about the twins’ personalities, telling that his daughter looks like Amal because Ellas is very elegant and dainty. The boy is just a thug, he’s a fat little boy, he laughs louder than everyone in the room, that his feature is the funniest thing, George said.

George Clooney and Amal Clooney are happy with kids

Ella and Alexander Clooney will turn one in June, the kids are healthy, so, their parents are able to back to their businesses. Amal is working mother while George is the best working father. Amal who became the fashion icon in recent years doesn’t forget her professional duties. Last week, the effortlessly elegant human rights lawyer has signed on to yet another high-profile case. Mrs Clooney joined the team representing two Reuters journalists Wa Lone and Kyaw Soe Oo, who have been jailed in Myanmar in December on charges that they were illegally possessing confidential government documents.

George and Amal mostly reside in Sonning-on-Thames, Berkshire, where they enjoy ‘pool parties until3am’and have a photobooth for guests. Behind that, sits George’s screening room complete with popcorn machine and sweets. They also travel to Lake Como during the summer and have a small base in LA.

The development includes a home cinema, 360-degree security and a 60ft swimming pool, surrounded by reclaimed York stone and a tennis court.