Barack Obama steps back into public spotlight: ‘So what’s been going on?’

Barack Obama’s speech at the University of Chicago was welcomed warmly, the public was really glad the ex-president came back into the spotlight and has some plans.

Barack Obama made a suprising appearance in Chicago, the ex-president met with Chicago students, he was in good humour, like a man who has been on a long holiday. Actually, he was, and this month of quiet travel was a really smart decision — long eight years at the White House were very intensive.

For Chicago event, Mr Obama opted a dark jacket and white shirt with tieless open collar and began by quipping:

Despite this joke, the entire speech was serious enough, Barack Obama shared his plans for the post-presidency, made his first public remarks since leaving the Office.

“I want to work with them to knock down those barriers and get this next generation to accelerate their move toward that leadership. If that happens, I think we’re going to be just fine,”

the 44th president said. About 500 people attended the invitation-only event, which was also televised. Obama, who had given his presidential farewell speech in Chicago in January. 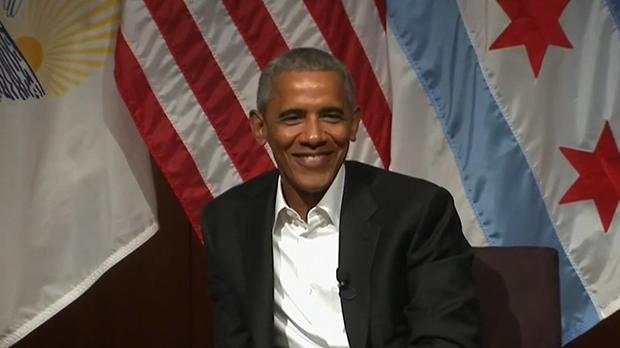 On Monday, Barack Obama moderated a panel discussion with young leaders. Earlier, he was as a community organiser in Chicago, and knows very well the actual issues of the city. There was also self-deprecation – “I’m old” – and lighthearted advice about the diplomacy of marriage and not oversharing on social media.

“If you had pictures of everything I’d done in high school, I probably wouldn’t have been president of the United States,”

Barack Obama is only 55, his political afterlife has the great perspectives, and since his leaving the White House on 20 January there were a lot speculations. The people tried to gues, what exactly is going to do the ex-president? On Monday, at the University of Chicago, Obama provided an answer: he will concentrate, above all, on trying to fix America’s dysfunctional politics.