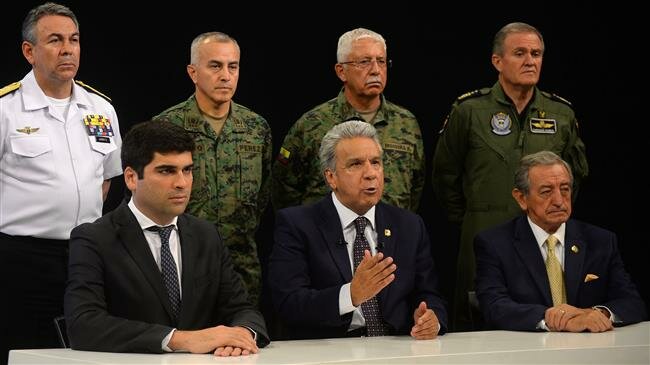 Ecuador’s government left the capital as protest actions intensify the sixth day in a row, Press TV reported on Wednesday. Authorities confirmed 19 civilians and 43 police officers were injured in the clashes in Quito while president Lenin Moreno assured that “under no circumstances” he is going to step down.

The scaled protests in Ecuador caused by the economic reform package implemented by President Lenín Moreno and the IMF. The sixth day in a row, tens of thousands of protesters from indigenous communities (organized in CONAIE, or the Confederation of Indigenous Nations in Ecuador) continue to protest against the new financial strategy of Moreno’s cabinet.

Last week, the government declared a state of emergency, the brutal repression followed immediately. The Quito authorities have arrested 500 people and dozens of wounded protesters but those measures only aggravated popular indignation.

In the Ecuadorian capital, the army has surrounded the government palace with tanks in order to protect it from demonstrators and there have been intense clashes between protesters and the military.

Despite the complex situation, president Moreno has sent a message from the city of Guayaquil, in which he informed that government is relocated temporarily. The national leader also announced that the government would be conducting all activities from Guayaquil while the demonstrations continued.

The president has blamed the chaos on his left-socialist predecessor, Rafael Correa and added “under no circumstances” he is going to step down.

“I don’t see why I should (resign) if I’m making the right decisions,” he said after announcing a state of emergency on Tuesday.

Taking the office in 2017, President Lenin Moreno gave a promise of “continuity with change,” but has turned rapidly towards the right. He aligned himself with the imperialist politics in the region and allied with the reactionary governments of Brazil, Argentina, and Colombia, among others.

Now, presidential approval ration has dropped quickly from of 70% to now just 30%, and with an all-out rebellion against his austerity measures, Mr Moreno is quickly becoming the first victim of Ecuador’s popular resistance.