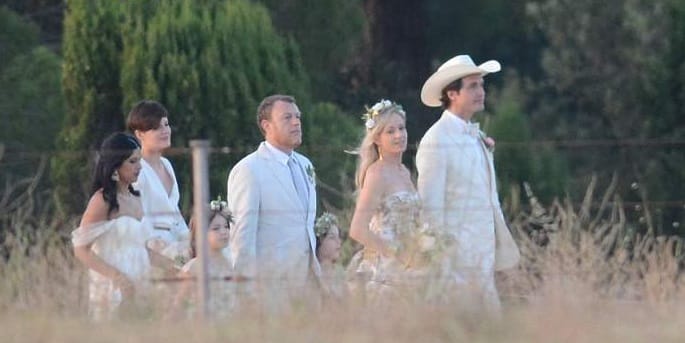 Among guests of the wedding day were Salma Hayek and her billionaire husband Francois-Henri Pinault. The actress looked chic in a full-length white dress at the lavish Spanish wedding, while Kimbal paired his Western accessory with a cream two-piece suit. Bride Christiana looked picture perfect in a cream bridal gown complete with an embroidered bodice and tulle skirt.

Christiana is the daughter of billionaire Sam Wyly, for her, it is the second marriage. Actually, Kimbal and Christina officially married on April 7 but celebrated the event with around 300 guests on Saturday.

The wedding bash’s guestlist even rumoured to include former presidents Barack Obama and Jacques Chirac as well as Hollywood actors Will Smith, Charlize Theron, Penelope Cruz. The celebrities from all over the world came to Spain to congratulated Elon Musk’s brother with the big day. Bono, Stella McCartney were also the guests of the wedding ceremony.

Guests arriving for the wedding enjoyed the Spanish sunshine at a luxury resort ahead of the wedding on Saturday, relaxing by a beachside bar and swimming in the sea. Kimbal Musk is said to have invested in X.com which was sold for $1.5billion in 2002.