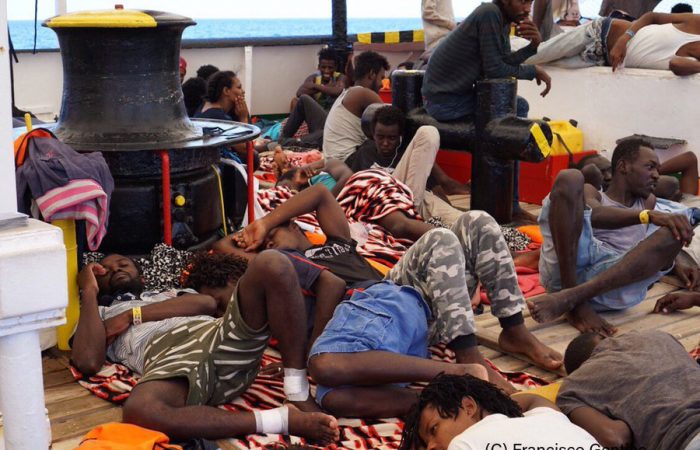 The Italian Interior Minister Matteo Salvini refused to allow 107 migrants on board a charity vessel The Open Arms to anchor in an Italian port. The far-right politician is known for his tough policy regarding migrants, but this time, the decision was «a disgrace to humanity», Spain said.

«What Salvini is doing in relationship with the Open Arms is a disgrace to humanity as a whole,» Spain’s Defence Minister Margarita Robles told reporters in Madrid.

The vessel Open Arms has been anchored since Thursday within swimming distance of Lampedusa island, and some of those rescued have spent 18 days onboard. While France, Germany, Romania, Portugal, Spain and Luxembourg have offered to take in the refugees, Italy refused to do the same.

Spain offered The Open Arms to dock on Mallorca

On Sunday, Spanish authorities offered the charity vessel to dock in Mallorca in the Balearic Islands in 1,000 km west of Lampedusa. Earlier the same day, an initial offer to go to the southwestern port of Algeciras was rejected because it was too far. Several people on the board needed urgent medical assistance, according to the Open Arms’ statement.

On Monday, the charity described the offer of Mallorca as «totally incomprehensible».

«While our boat is 800 metres (yards) off the coast of Lampedusa, European states are asking a small NGO like ours to face… three days of sailing in harsh weather conditions,» it added in a statement.

In an interview with online newspaper eldiario.es, Open Arms founder Oscar Camps suggested Madrid could send a faster boat to pick up the migrants or fly them from Lampedusa to Spain.

While the European Commission hailed on Monday Spain’s «good will», Matteo Salvini argues Italy bears an unfair burden as the first port of call for rescued migrants. Over the past 18 days, 479 migrants arrived on Italy’s shores, more than 100 of them on Lampedusa, said Italian interior minister.

Spain’s Deputy Prime Minister Carmen Calvo said Italy has closed its port to the Open Arms in a «totally illegal and incomprehensible way» but she also criticised the NGO for not accepting Madrid’s permission to dock.