Poland opened a navigable canal through the Baltic Spit 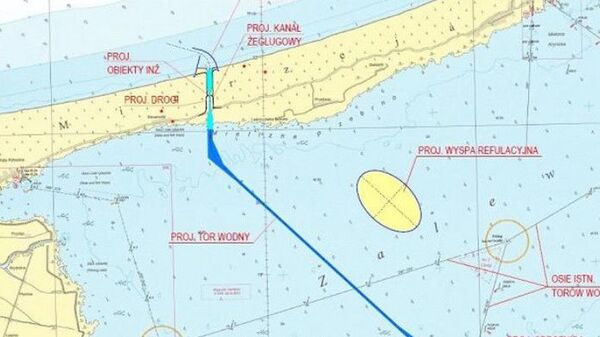 The profitable channel through the Baltic Spit was solemnly opened in Poland, on Saturday the first ships passed through it.

The Baltic (Vistula) Spit is a narrow strip of land that separates the Kaliningrad Bay from the Gdansk Bay. The length of the spit is 65 kilometers (35 of them belong to Russia). In Poland, the spit is connected to the mainland; in the Kaliningrad region, it is separated from the mainland by a navigable strait. Poland has been building a navigable canal here for several years, more than a kilometer long and five meters deep. This will allow vessels with a draft of up to four meters, a length of up to 100 meters and a width of up to 20 meters to enter the port of Elbląg.

In addition to the canal with a lock and gate system, an artificial island with an area of ​​almost 200 hectares and drawbridges were built. According to the latest data, the cost of construction amounted to almost two billion zlotys (about 425 million dollars).

The solemn opening ceremony of the canal across the Baltic Spit was timed to coincide with the 83rd anniversary of the start of the Liberation Campaign of the Red Army – a set of political and military measures of the USSR to legally return control over the territories of Western Ukraine and Western Belarus.

⠀
The event was attended by the top leadership of Poland, including President Andrzej Duda and Prime Minister Mateusz Morawiecki, chairman of the ruling Law and Justice party Yaroslav Kaczynski.

⠀
Starting to build the canal, the Polish authorities paid special attention to the fact that thanks to it, it would be possible to enter the Vistula (Kaliningrad) Lagoon, bypassing Russian territorial waters. Polish ships will have free access to all ports of the Vistula (Baltic) Lagoon and to the seaport of Elbląg.

Until now, ships had to enter the Vistula Lagoon and the port of Elblag through the territorial waters of Russia, notifying the Russian authorities in advance. At the same time, Russia had the right to prohibit the passage of ships through its maritime territory.

Polish President Andrzej Duda, speaking at the opening ceremony of the canal, acknowledged that it has more political than economic significance, since ships with a small draft can sail through it.