Russia blames ‘shameless and aggressive’ US for crisis in Venezuela 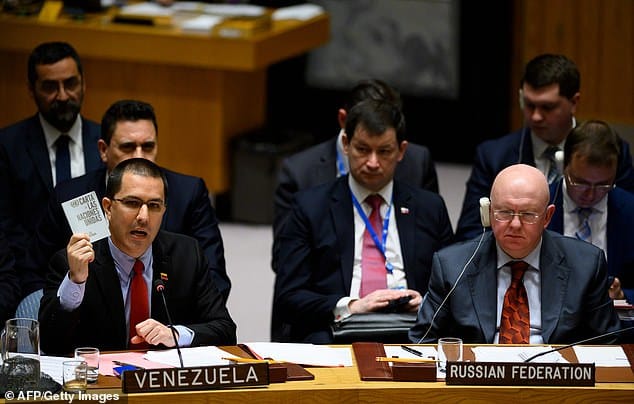 Russia’s reaction to the Venezuelan crisis was clear and understandable when Russia’s U.N. Ambassador Vassily Nebenzia gave his speech during the UN Security Council. Kremlin blames ‘shameless and aggressive’ US move, which led to the deepening crisis in the South American country.

Russia opposes the White House efforts and has accused Trump’s Office of backing a coup attempt, placing Venezuela at the epicentre of a growing geopolitical duel between two superpowers.

UN Security Council meeting on Saturday was almost stopped by Russia’s ambassador, but it was voted down with nine of the 15 members agreeing to go forward. While MikePompeo urging the UN council to back Venezuelan opposition leader Guaido and called for free and fair elections as soon as possible, adding that president Maduro must step down, Vassily Nebenzia insisted that Venezuela does not represent a threat to peace and security.

The most recent waves of anti-Maduro protests in Venezuela gave a brilliant opportunity to the opposition leader Guaido to urge for the elections. being vouched for the US support, Mr Guaido announced on Thursday that he assumed executive powers as interim president. He also asked for further demonstrations until a government could be formed and Nicolas Maduro had stood down.

The EU’s ultimatum was rejected by president Maduro at a UN meeting, he accuses Mr Guaido, the head of the National Assembly, of mounting a coup. While Russia and the US are duelling on Venezuela issue on the sides of the UN SC, China’s representative to the UN, Ma Zhaoxu, said that the situation in Venezuela “does not constitute a threat to national security” and China “does not interfere in other countries’ internal affairs”.