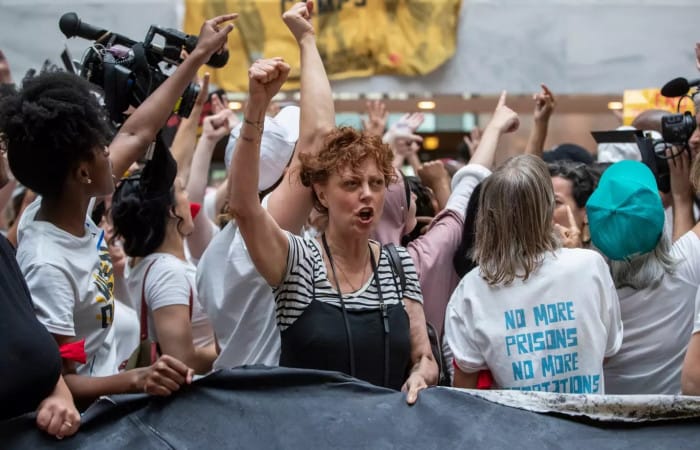 Ms Sarandon was arrested near the Hart Senate Office Building on Capitol Hill in Washington DC where the actress protested against Trump’s decision to take the children away from their immigrant parents. According to the police, an unlawfully demonstrating on Thursday resulted in nearly 600 arrests.

Many protesters near the Hart Senate Office Building on Capitol Hill in Washington DC also carried banners with the hashtag #FamiliesBelongTogether. That was a society’s response to the recent Trump’s decision. President bowed to public pressure and signed an executive order promising to “keep families together” in migrant detention centres last week.

But critics said the order would not address the issue of families already separated, with 2,342 children taken from their parents between 5 May and 9 June alone. Melania trump’s jacket also worsened the situation. Susan Sarandon and other protesters were chanting “We care”, in reference to FLOTUS’s controversial decision to wear a jacket bearing the words “I really don’t care do u?” during a visit to a migrant child detention centre in Texas.

Susan Sarandon’s arrest is not the first one for the actress and activist, she was previously arrested in 1999 during a protest against a police shooting of an unarmed African American teenager in New York.