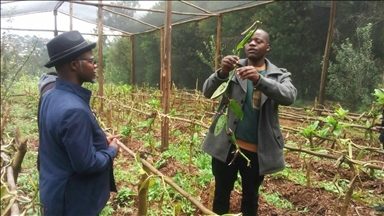 In tanzania, annual vanilla production increased significantly. Over six years, coffee lost its priority in the agricultural sector due to lower profits in comparison with vanilla, Andalou Agency has learned.

The farmers in Tanzania prefers to grow vanilla, not coffee. Since 2015, vanilla harvests were icreased steadily, from nearly 230 tons in 2015 to 1,949 tons in 2020, Tanzania’s Agriculture Ministry said. According to the official data, vanilla production has increased significantly in the last five years, rising drastically.

Moreover, the price of vanilla hitting record high this year, so, growing number of farmers from Kilimanjaro in the north to Kagera are foregoing coffee and other cash crops in favor of vanilla cultivation.

To support the perspective crop, Tanzania is determined to promote vanilla farming by addressing various challenges the farmers face, including access to quality seeds and finding reliable markets that benefit smallholders.

To avoid the losses, the Tanzanian farmers have learned the new method, a hand-pollination. People handpick the mature seedpods, boil them to prevent sprouting, and then sun-dries them until they are dark, slender, and leathery. However, the farmers say that the only problem exists – when the middlemen offer lower prices than the market value of the exotic crop.

Daudi Mbogo, a researcher at the Tanzania Agricultural Research Institute, said vanilla farmers have a better chance of benefiting economically. “Vanilla is a high-value crop, although its market can be volatile at times, it always fetches a high price,” he stressed.