Kenya’s only white female giraffe and calf killed by poachers 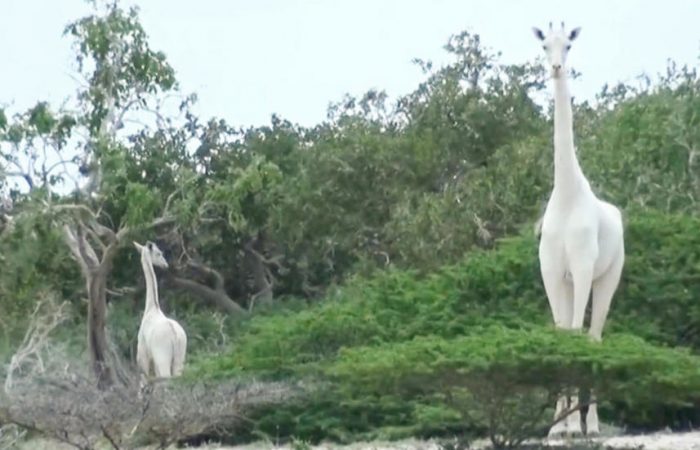 The unique white female giraffe and calf killed by poachers in Kenya several months ago, the rangers revealed. Animals were found in a skeletal state in Garissa County, in the east of the African country.

Kenya Wildlife Service’s rangers have confirmed the death of the only white giraffe and a calf. The rarest animals had not been seen for a while, so, rangers initiated the search. As RFI reported quoting the Ishaqbini Hirola Community Conservancy, the mammals were slaughtered some three or four months ago. The poachers’ motives are not known.

Rare giraffes’ deaths mean there is just one specimen left alive in Kenya, if not in the world – a male calf born to the now-dead female in August last year.

The senseless deaths of the white giraffes marked a “sad day” and a major loss for researchers and those who live on the proceeds of the tourists attracted to what is a remote corner of Kenya.

Commenting on the inhuman poachers’ act, Mohammed Ahmednoor, the manager of the conservancy said they are the only community in the world who are custodians of the white giraffe.

“Its killing is a blow to tremendous steps taken by the community to conserve rare and unique species, and a wakeup call for continued support to conservation efforts,” Ahmednoor added.

Though another white giraffe was spotted in Tanzania’s Tarangire National Park in early 2016, it is not known what has happened to it since.

The white giraffe was a symbol of the Kenyan wildlife

Huge interest was stirred when the white giraffe was first seen on the conservancy in 2017, an interest that turned to excitement when she gave birth to two calves, the second just over six months old.

The whiteness of the animal’s coat is caused not by albinism but by a condition known as leucism, which causes skin cells to have no pigmentation, though dark pigment is produced in their soft tissue, giving them dark eyes. Animals affected by albinism have red eyes.