Putin receives puppy as birthday present from President of Turkmenistan 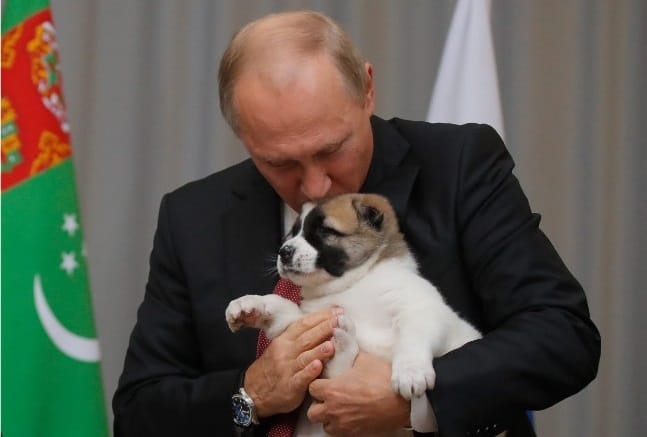 Russian president Vladimir Putin, one of the most powerful men on the planet, has been given another puppy as a gift for his birthday. The lovely present came from Turkmenistan, from president Gurbanguly Berdymukhamedov personally.

As we all know, Vladimir Putin is an avid dog lover, the Russian leader was sincerely glad to receive such present as the Central Asian Shepherd puppy bestowed by the Turkmen president on Wednesday.

Mr Berdymukhamedov said he is happy to present Mr Putin this wonderful birthday gift. Putin celebrated his 65th birthday on October 7, holding and kissing the dog, named Verny, or “Faithful” in Russian. Everyone knows that the Russian President’s most beloved dog was a black Labrador named Koni, a present from Russian Defense Minister Sergei Shoigu. In 2004, the family of prime minister Putin welcomed the totally black dog.

In 2007, Koni met with German Chancellor Angela Merkel, and the attention of this big black creature wasn’t the best moment for Merkel who doesn’t love dogs, especially during the political talks.

Earlier, Vladimir Vladimirovich received other dogs as the gifts. In 2011, he received from the Japanese officials lovely and smart Akita named Yume. The Japan was extremely grateful to Russia for its timely help after the earthquake that year. A Bulgarian shepherd named Buffy came from Bulgaria’s with the premier minister, that animal was another gift to the Russian leader’s birthday. The dogs, horses and a tiger were among the presents for Putin’s birthdays in the different years.

In 2017, Putin thanked for such lovely birthday gift bu promised to advise with his favourite dog Koni:

“As far as bad moods go, of course I have them like any other person, but in those cases I try to consult with my dog Koni — she gives me good advice.”