The death toll during the stampede in Seoul has risen to 149 people. 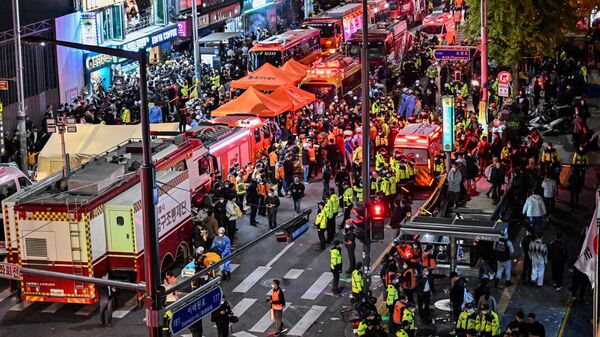 The death toll from a stampede in South Korea’s capital Seoul at Halloween parties has risen to 149, Yonhap News Agency reported, citing firefighters.

Earlier it was reported that 146 people were killed and 150 injured during a stampede in a narrow alley in the named Seoul area next to the Hamilton Hotel. In connection with the incident, South Korean President Yoon Seok-yeol ordered first aid to the victims, and Seoul Mayor Oh Se-hoon interrupted a visit to Europe.

According to the Seoul fire department, the stampede began to form around 22.22 Saturday (16.22 Moscow time). The alley, which opens onto a wider street, is different in that the road goes down there, narrowing, and the surface there is uneven. Therefore, people in a crush could easily stumble and fall under pressure from behind.

Among the dead, most people are aged 20 to 30 years, they are being identified. It is noted that there were no gas leaks, fires or other incidents in the area. The exact cause of the stampede is still being investigated.

Firefighters completed two phases of search and rescue operations, the victims were sent to 17-20 nearby hospitals. A search was also made in the clubs and establishments closest to the alley, but no victims have yet been found there. In total, 848 people from the rescue services were mobilized to the area of ​​the incident, including 346 firefighters.

⠀
Reportedly, despite the stampede, people in the Itaewon area continued to congregate in that narrow alley because they were unaware of the situation or ignored it. The named area is known for hosting a large number of Halloween parties.

⠀
According to eyewitnesses, loud music was playing in the street, many people came in costumes, so “it was not clear whether they were really fainting or if it was just a game.” After the formation of a crush, people in the narrowest part of the alley asked those who approached from behind to step back, but because of the noise and music, these requests did not reach those who joined the crowd trying to push forward.