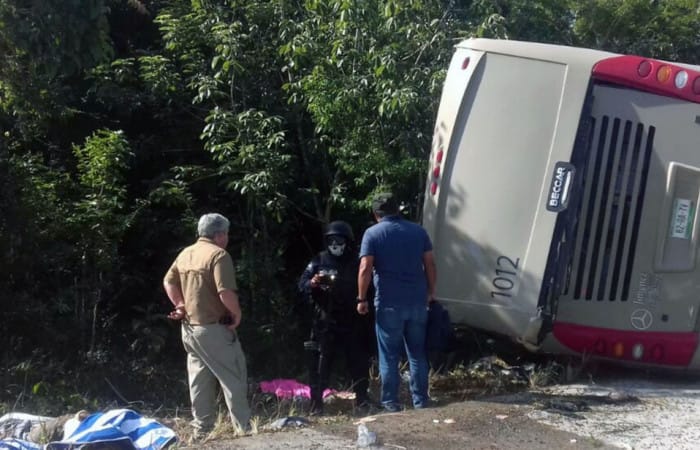 The bus was en route to the ruins at Chacchoben, which is about 110 miles south of Tulum, a popular tourist destination in Mexico, Associated Press reported on Wednesday. Among 12 killed were also foreign tourists and seven Americans.

The nationalities of the dead have not yet been released but several Americans and two Swedes were among those injured. According to Quintana Roo state prosecutor office, the total injured was about 18 people. A total of 20 others were injured, including seven Americans and two Swedes. The Foreign Office said that there were no Britons on board.

The scene of the crash was cordoned off with police tape, 12 people have been killed after a bus carrying cruise ship passengers on an excursion to Mayan ruins in Mexico flipped over on a narrow motorway. Eleven tourists and their tour guide died in the crash, about 300km (185m) from Cancun on the Yucatan peninsula.

The tourists were headed out on an excursion of the Mayan ruins in southeastern Mexico when their bus ended up on its side along a two-lane road shortly after 9 AM, the Washington Post reported.

Royal Caribbean Cruises, based in Miami, released a statement saying passengers from two of its ships – the Celebrity Equinox and Serenade of the Seas – were on the bus. The company expressed its sympathies and said it was assisting with medical care and transportation.

The local authorities said that investigators were working to determine the cause of the crash, Vicente Martin, spokesman for the Quintana Roo state Civil Defense agency assured that the first results of the investigation will be available as soon as possible.