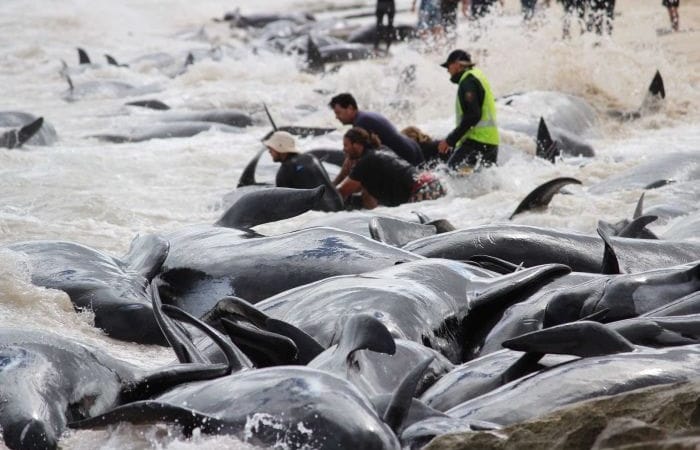 Hamelin Bay became the place where more than 150 whales have stranded again, this bay attracts the sea creatures in a magical and unexplainable way, say the officials from the state’s Department of Biodiversity, Conservation and Attractions.

The Fisheries Department reports that mass whales stranding has already happened before several times. So far, the biologists don’t find out the reason why the sea animals do it.  In 2009 and 2015, almost on the same date at the same location, the cases of a mass whales beaching were registered.

According to the wildlife officials, the biggest mass stranding of whales in WA was in Dunsborough in August 1996, when 320 long-finned pilot whales beached themselves. Actually, there’s an area off New Zealand called Golden Bay where there are strandings involving pilot whales almost annually, like a weird scheduled event.

Whales on the Australian beach: the rescue operation’s details

On Friday, more than 150 whales became stranded on a Western Australia beach, and the poor weather conditions made the rescue operation complex. But by nightfall, all but seven of the whales were dead, according to the state’s DBCA.

“Most of the whales beached themselves on dry land overnight and have not survived,”

said Jeremy Chick of the department’s Parks and Wildlife Service, who was overseeing the rescue attempt.

Seven surviving whales were headed to deeper water, thanks to the joint efforts of hundred volunteers, wildlife personnel and veterinarians who arrived the Western Australia beach to make their contribution to the rescue operation. Unfortunately, weather conditions there and the threat of sharks — enticed by thousands of pounds of flesh — were impeding their brave efforts.