Pontiff ‘happy’ to land in Iraq on historic visit 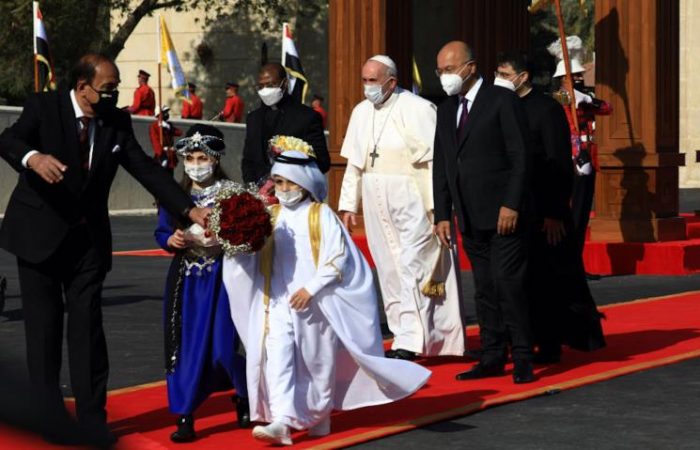 Pope Francis delivered his promise to visit Iraq despite the pandemic and rocket attacks. The pontiff has landed in war-battered Iraq Friday on a first-ever papal visit, Reuters said.

The 84-year-old pope becomes history after he landed in Iraq. Prior to starting his Middle Eastern tour, he said he will travel to Baghdad as a «pilgrim of peace».

«I’ll try to follow directions and not shake hands with everyone, but I don’t want to stay too far,» Francis said ahead of his arrival.

Upon his arrival to the capital city of Baghdad, Pope Francis promised he will also reach out to Shiite Muslims when he meets Iraq’s top cleric, Grand Ayatollah Ali Sistani.

The four-day trip started with Iraq, and that is the pope’s first abroad since the onset of the Covid-19 pandemic. During one year, the novel pathogen made the head of all Catholics to feel «caged» inside the Vatican.

«I’m happy to resume travel, and this symbolic trip is also a duty to a land that has been martyred for years,» he told journalists aboard his plane.

In his welcoming speech, Kadhemi said that Iraq’s people and government are welcoming the pontiff with love and peace.

The brave pope’s move has deeply touched the local Christians, whose numbers have collapsed over years of persecution and sectarian violence, from 1.5 million in 2003 to fewer than 400,000 today.