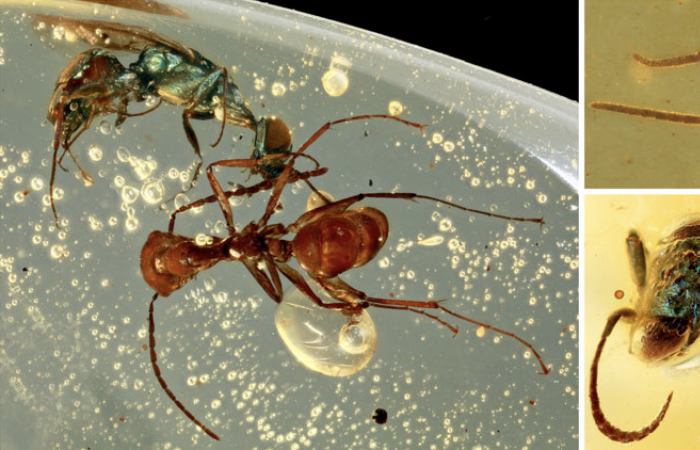 A research team from the Nanjing Institute of Geology and Palaeontology of the Chinese Academy of Sciences (NIGPAS) has revealed the 99-million-year-old amber fossils. The rare fossils were found in Myanmar, according to a recent publication in journal Proceedings of the Royal Society B.

Dozens of amber fossils from the Cretaceous period that still contain evidence of their occupant’s original colours, said the team of Chinese researchers. In fact, bursting in metallic blues, purples, and greens, these ancient insects are both alien and oddly familiar.

For scientists, the discovered fossils look pretty different because of this vivid bright colours. Normally, they provide a dull, monochrome view of the past. In general, palaeontologists are finding ways of teasing out colours from well-preserved fossils of any size.

Colour is an extremely important aspect for researchers, it can shed light on ancient environments and ecosystems, particularly when it comes to camouflage.

A research team from NIGPAS has studied 35 individual amber samples with fantastically preserved insects trapped inside. The fossils were found in an amber mine in northern Myanmar.

“The amber is mid-Cretaceous, approximately 99 million years old, dating back to the golden age of dinosaurs,” explained Cai Chenyan, the lead author of the new study, in a press release.

“It is essentially resin produced by ancient coniferous trees that grew in a tropical rainforest environment. Animals and plants trapped in the thick resin got preserved, some with life-like fidelity,” Chenyan said.

The newly-discovered amber fossils retain structural colours, which tend to be intense and rather eye-grabbing (including metallic colours) and are produced by microscopic light-scattering structures located on the heads, bodies, and limbs of animals.

“The type of colour preserved in the amber fossils is called structural colour,” explained Pan Yanhong, a co-author of the study and a professor at NIGPAS.

The amber fossils retained evidence of their structural colours, but not before careful preparation. To test whether the observed colours were caused by the nanostructures, the scientists did some theoretical modelling. They studied a selected wasp specimen using an electron microscope, which enabled them to match patterns with specific colours.

Specifically, reflectance wavelengths at 514 nanometres corresponded to bluish-green colour as seen under white light, which nicely matched what they saw with their own eyes.