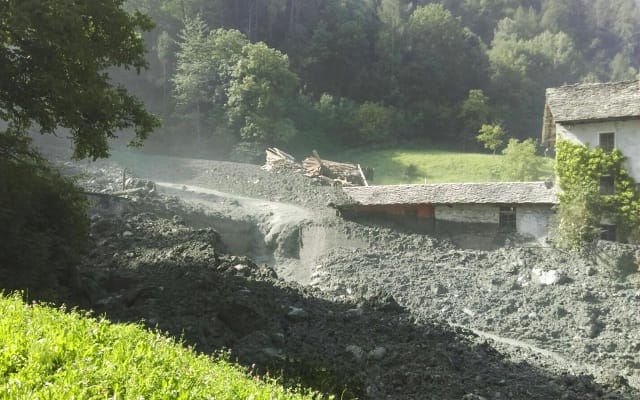 The landslide in Switzerland could take lives of the eight people, among them were German, Austrian and Swiss citizens. Police of the region of Val Bondasca informed that the search had intensified overnight, with a Swiss army helicopter taking part.

According to the cantonal police, eight people who were there at the time of the landslide have not been found. The landslide on Wednesday morning sent mud, rocks and dirt flooding into the village of Bondo. About 100 people were evacuated, some airlifted out with helicopters.

On August 23, the landslide near the Italian border forced the evacuation of several small villages in southeastern Switzerland. Swiss media reports that the natural disaster happened at about 09:30 local time on Wednesday when boulders and earth cascaded down the side of the Piz Cengalo mountain.

The landslide in Switzerland, latest news

The cantonal authorities installed the rockfall alarm system – it’s a lesson learnt from the bitter experience of the previous huge rockfall in 2012. Thanks to the alarm system’s signal, before the debris approached the village of Bondo the fire service was able to evacuate its inhabitants.

The signal also warned the people who were staying at two Swiss Alpine Club cabins nearby, giving them an opportunity to react quickly and to leave the dangerous area.

Images taken after the landslide showed a broad swath of farmland covered in a grey, moving mass, with mud partially engulfing some buildings. According to the cantonal police, 12 farm buildings, including barns and stables, had been destroyed by the flow of debris on Wednesday.