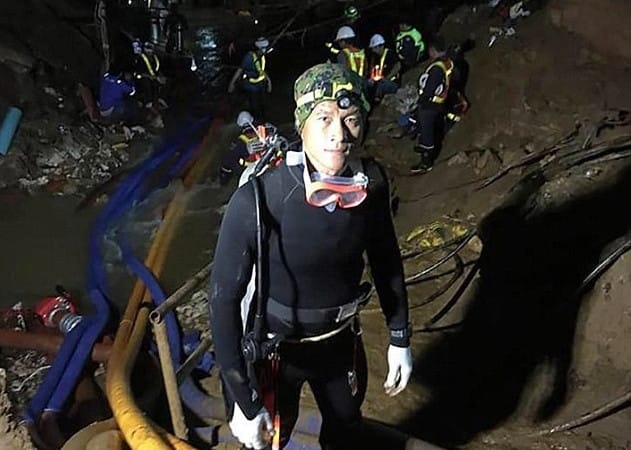 During the efforts to rescue 12 boys and their football coach trapped in a flooded cave in Thailand, one navy diver died. Narongsak Osatanakorn, the governor of Chiang Rai province, said that oxygen has been depleting inside the cave due to the presence of hundreds of rescue workers. According to the authorities, the holes are being drilled in the jungle above the cave to try and increase air supply and about 30 oxygen tanks have also been released in their area.

Initially, the rescuers suggested that drilling was too dangerous due to the fact the boys and their coach are trapped in a small space. But there was the only option. The 37-year-old Saman Kunan, former navy diver, died due to a lack of oxygen in the tunnel, said Commander Arpakorn Yookongkaew. The ex-navy seal was trying to reach a cavern set up as a command centre 1.2miles inside the cave system when he ran out of air at 2 am local time.

He was returning to the centre after placing oxygen tanks through the cave’s underground network. According to Thai Seal commander Rear Adm Yookongkaew, inside the cave is tough.

“On the way back from setting up oxygen bottles, Petty Officer First Class Saman Gunan passed out. His buddy tried to give him first aid, but he did not respond. We brought him to chamber three and gave him another round of first aid, but he remained unconscious,”

It comes as officials warned the window of opportunity to free the youngsters is now ‘limited’ as the throng of soldiers, engineers, paramedics and other volunteers at the site swelled to 2,000.