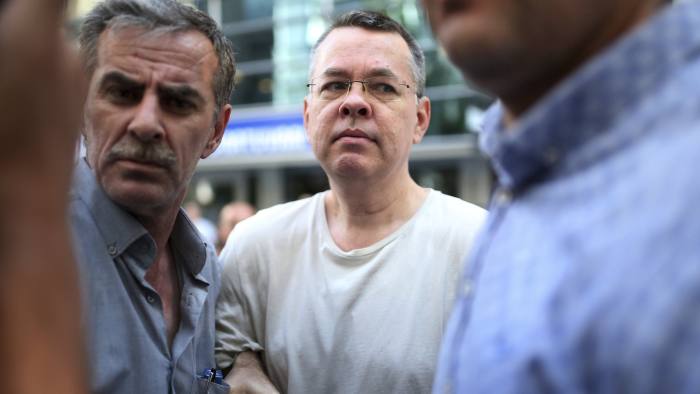 Turkish court made an important decision to release American pastor Andrew Brunson, Finacial Times reported on Saturday. But still remains unclear, whether that move was a result of US sanctions against Turkey.

Pastor Andrew Brunson has been released from Turkish jail on Saturday, confirmed the White House. However, it has not said whether the release of the pastor would trigger the removal of sanctions imposed on Turkish officials in connection with his case. Pastor left from the western city of Izmir in a US military plane bound for Germany, later he probably will visit the White House, said Donald Trump.

The national leader tweeted minutes after the court ruling on Friday: “We hope to have him safely back home soon!”

He added as well he had been “working hard” on releasing an American citizen from the Turkish prison where he was pent two years. The pastor was arrested over alleged links to the banned Gulenist movement after a failed coup attempt in 2016. Later espionage charges against Mr Brunson were dropped. Because of that arrest, the relations between Turkey and the US were worsening.

The recent package of the economic sanctions against Turkey, probably, made the Turkish judicial system to revise Brunson case. Ankara’s urgent need to defuse the crisis increased after the lira’s plunge accelerated in August when Donald Trump imposed sanctions on two Turkish ministers and doubled tariffs on Turkish metals.

Sarah Sanders, the White House press secretary, said: “The United States and Turkey have a number of mutual concerns regarding regional security and stability, and we look forward to working together on these issues.”