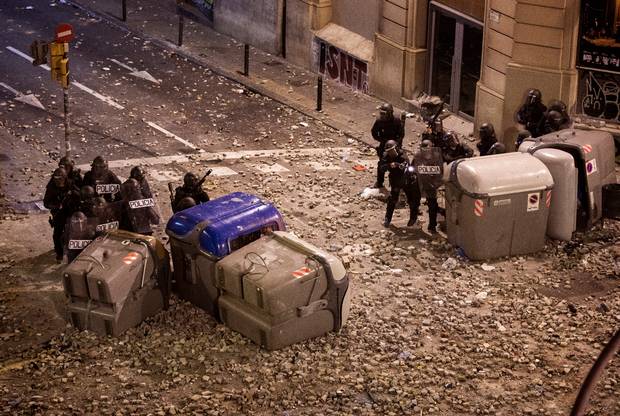 Barcelona protests endured its fifth straight night of unrest, Independent reports. On Friday night, the scale protests actions on the streets made police use rubber bullets and tear gas against demonstrators who have been demanded Catalonia’s independence and the release from prison of separatist leaders.

Barcelona became the epicentre of the protests caused by recent jailing Catalan separatists. Five days in a row, the chaotic scenes of violence continue, making the daily life of Barcelona unbearable sometimes.

During the whole week, more than a half million protesters, including families with children, have been marching in the Catalan capital, according to local police. They are chanting «Independence!» and «Freedom for political prisoners!» while some of them had walked for three days in five massive «freedom marches».

The supporters of Catalonia’s independence converged on Barcelona and joined students and workers who also took to the streets during a 24-hour general strike.

On Friday night, police resorted again to rubber bullets and, for the first time this week, to tear gas and water cannons to repel masked youths hurling cobblestones and flammable bottles, building barricades and setting dozens of bonfires with large garbage bins.

Barcelona police reported on arrests of around 400 people since Monday when the street protests have begun. On Monday, the separatists have launched the unbelievable activity after the Supreme Court sentenced to lengthy prison terms nine separatist politicians and activists. The nine had led a 2017 push for independence that triggered Spain’s deepest political crisis in decades.

On Friday, the huge displays of support were mostly peaceful, but protesters and police battled over the control of Barcelona’s centre after protesters circled the gates of the national police’s headquarters. As clashes with police escalated, the chaos spread to other areas of the Catalan capital.

Touristic attractiveness of Barcelona have famed significantly, two large cruise operators diverted their ships to other ports. Hundreds of excursions were cancelled due to the protests and clashes. In fact, Catalonia’s budget are losing millions of euros since 2017 when the separatist movement has been sparkled again.