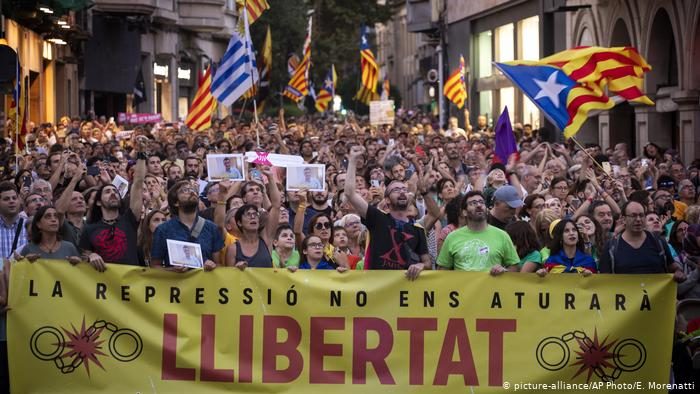 Quim Torra, head of Catalonia’s regional government, has denied on Thursday any links to seven separatist activists jailed in September. As The Local Spain reports, those separatists insisted they received the instructions from Torra how to occupy the Spanish region’s parliament.

Prime Minister Pedro Sanchez had demanded that Catalan president Quim Torra explain his links to the separatists. On the eve of the elections on Sunday (fourth in a row for four years), the Spanish media reported that members of the separatist group had told investigators that the order to occupy the assembly came directly from Torra.

During the investigation by Spain’s Guardia Civil police, several tapped phone conversations were transcribed and attached to the court documents. According to them, two of the jailed separatists have discussed a plan to occupy Catalonia’s regional parliament in Barcelona with «the Catalan government inside» and «resist during one week».

In the recorded conversations, one of the suspected leaders of the group implicated Torra and his predecessor Carles Puigdemont calling them by the nicknames «Gandalf» and «Lisa». In a video of his interrogation by police which was leaked to the media, the man also said that the plan «came from the presidency…from Torra».

Catalonia’s regional government said in a statement that Torra «denies» the reports which lacked «any type of credibility».

«Moreover, he maintains he hasn’t had any type of relationship with the detained,» the statement added.

In September, police arrested nine separatists, accusing them of belonging to a new and unknown group, the Tactical Response Team. Spain’s top criminal court, which had ordered the investigation into the group, ordered that seven of them to be held in jail while the investigation continues.

The preliminary allegations include an intention to use «any means, including violent ones» to establish an independent republic of Catalonia and possessed materials that could be used to make explosives.

Xavi Pellicer, defending the Tactical Response Team’s members, said that allegation is ‘politically motivated’ while ‘the accusations of terrorism do not hold up by any means’. In other words, the Supreme Court of Spain is trying to criminalise the Catalan independence movement.

Another point of legal defence is the suspects made their statements to police following «threats and coercion», Pellicer added.