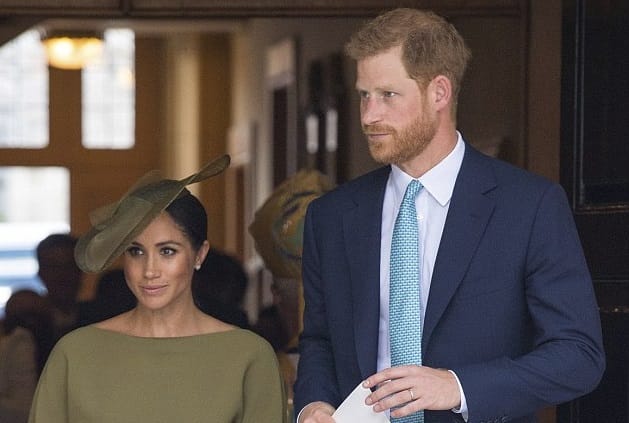 Duchess Meghan and her husband made the first public appearance with nephew Louis, who did not attend their wedding at Windsor Castle in May. Prince Harry’s wife opted an olive-green outfit for the christening ceremony took place on Monday, Daily reported.

Duchess of Sussex looked elegant in an olive green shift dress as she attended Prince Louis’ christening service at the Chapel Royal at St James’s Palace. On Monday afternoon, Duke and Duchess of Sussex made their first public appearance since the wedding day. Ms Markle opted for a frock by Ralph Lauren and a coordinating hat by milliner Stephen Jones while Prince Harry wore the classic navy blue suit.

Meghan had previously been sticking to blush pink and nude tones following her wedding, which experts had suggested was a sign of respect to the Queen who was absent during the christening ceremony die to Her Majesty’s tight schedule. For Duke and Duchess of Sussex, it is also a busy week, the royal couple attends a RAF centenary event Tuesday morning along with the Queen and senior royals.

Duchess Meghan was baptised and confirmed into the Church of England in March, so venue for Louis’s christening service holds special significance to her. Being arrived, Duchess of Sussex met with the Archbishop of Canterbury Justin Welby, who presided over the service today and who baptised Harry’s wife.

Although there were suggestions that Harry and Meghan will be among Louis’ godparents, the Duke and Duchess of Cambridge chose friends and more distant family members instead.

After Monday’s ceremony, Harry and Meghan will fly to Dublin, where they will be spending two days visiting organisations which are ‘central to Irish life’. Their engagements include visiting the home of Gaelic football and the country’s most famous university.

Duke and Duchess of Sussex will also attend a garden party at the British ambassador’s residence, and attend official meetings with the Irish president, Michael Higgins, and prime minister Leo Varadkar.