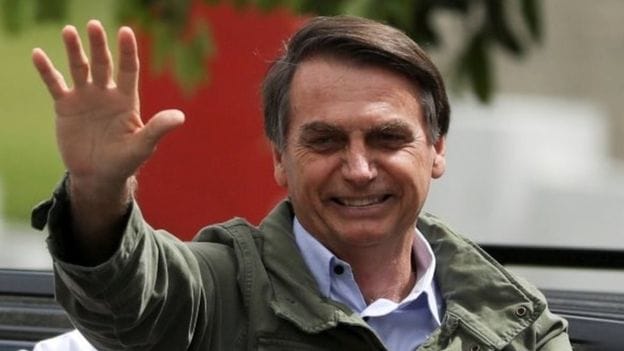 The far-right candidate Bolsonaro wins Brazil poll after he campaigned on a promise to eradicate corruption and to drive down country’s high crime levels, BBC reported.

For Brazil, the night has been dramatic as Bolsonaro secured enough votes to become the next president. As for what is next for the country under his leadership, that is anyone’s guess. Bolsonaro promised his government would be a “defender of democracy and the constitution”, the far-right candidate has been elected as the next president of Brazil, winning 55.1% of the vote in the second-round vote between himself and PT candidate Fernando Haddad.

His links to the military and admiration for the former dictatorship concern many Brazilians, as do his sexist, racist and homophobic remarks. However, a number of Bolsonaro supporters took to the streets outside his home in Rio de Janeiro to let off fireworks and wave Brazilian flags. Thousands of Jair Bolsonaro supporters have packed Avenida Paulista tonight, among them babies, toddlers, teenagers and the elderly.

There were some reports of scuffles between rival supporters. While Bolsonaro supporters celebrated in the streets across the country, the military police and other military personnel were hailed as heroes.