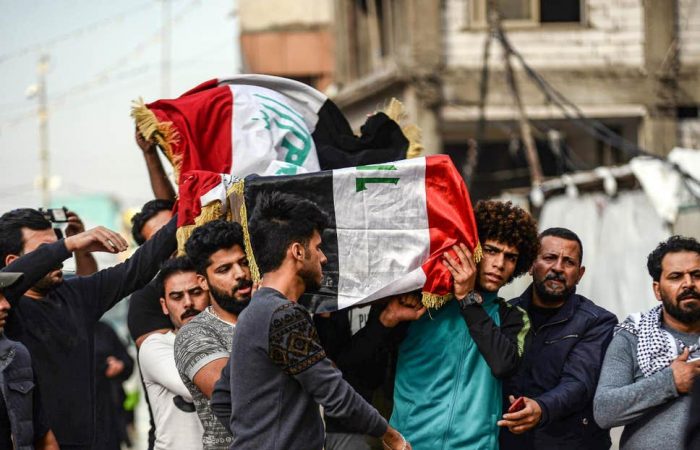 On Thursday, Iraqi security forces shot dead 46 people in Nassiriya. Over the recent days, 12 more were killed in Najaf and four in Baghdad. The local mass media report that a death toll rises to at least 408, the protesters insist that number is much higher.

Most of the dead were unarmed protesters, however, some of them had a gun of different types, the medical and police sources said. Clashes between protesters and security forces broke out early on Friday in Nassiriya, wounding several people, the local hospital staff said.

According to the Grand Ayatollah Ali al-Sistani’s Friday sermon delivered in the holy city of Najaf, the Iraqi parliament is “invited to reconsider its choices” in regard of recent voting for the government of prime minister Adil Abdul-Mahdi.

The Iraqi top cleric reminds in his sermon that “enemies and their apparatuses are trying to sow chaos and infighting to return the country to the age of dictatorship … everyone must work together to thwart that opportunity”.

On Wednesday, the European Parliament has reviewed the crisis in Iraq. Federica Mogherini said in her speech that Iraq faces a unique set of problems right after ending of the long-time armed conflict. The social, economic and political crisis is deepening.

The unrest is Iraq’s biggest crisis for years. Protesters demand the departure of a Shi’ite-dominated ruling elite backed by Iran which has held power since the US-led invasion and overthrow of Sunni dictator Saddam Hussein in 2003.

A leading cleric in Iraq has a certain impact on minds, so, he warned of civil war after a deadly day of violence in which security forces shot dead 46 people in the Iraqi capital and the southern provinces.

The top Shiite cleric urged lawmakers to “reconsider” their support for the current government, stressing that escalation of the violence will be the most unwanted thing for Iraq at the moment.