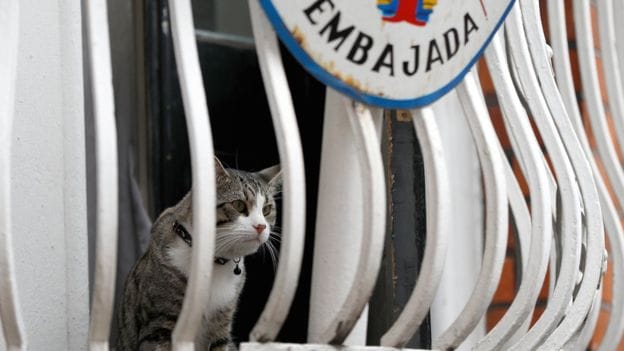 Julian Assange’s life in the Ecuadorean embassy recently was complicated with several minor warning, the WikiLeaks founder has been given a set of house rules. As BBC understood, the hosts gently reminded Mr Assange to clean his bathroom and to take better care of his cat.

The 47-year-old Julian Assange was sent a memo in which he was warned that his feline companion could be confiscated if his owner doesn’t obey the common set of house rules. Plus, reads the set of guidelines, written in Spanish, Mr Assange should look after its “well-being, food and hygiene” living at the Ecuadorean embassy in London.

In addition to the cat and hygiene rules, Ecuador also said it would partially restore his internet connection because Mr Assange doesn’t want to stop interfering in other countries affairs. Such a behaviour doesn’t make easy the relations between Ecuador and other states. The Australian and his guests are explicitly prohibited from using or installing “unauthorised equipment”.

The WikiLeaks founder has been holed up at the embassy since 2012, however, his online access cut in March this year after series of non-diplomatic posts. In case of rejecting to follow the rules of Ecuadorean house, Mr Assange may be handed to a refuge.

In fact, Julian Assange’s life is looking like a voluntary prison term with no perspectives of being released, his staying at the Ecuadorian embassy could be eternal. According to Carlos Poveda, Assange’s lawyer in Quito, it’s virtually a prison regime

“This new regime goes against his basic human dignity as an asylee,” the lawyer added.