Michelle Obama to appear on The Ellen DeGeneres Show this week 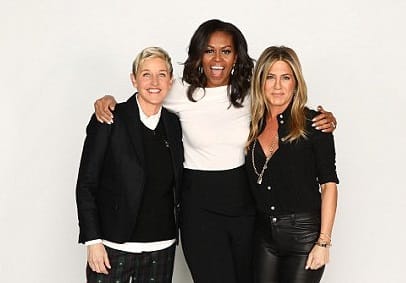 Michelle Obama is one of the most attractive first ladies of the United States, who is going to appear on The Ellen DeGeneres Show to help Ellen ring in her 60th birthday. The unusual two-part birthday special will air on February 1 and 2.

Michelle Obama will give the first her interview since the leaving White House in 2017. The former first lady will make a triumphant return this week when she is guest of The Ellen DeGeneres Show. For the host of the show, it is very flattering that Michelle comes to her and congratulate with the 60th birthday.

The two-part birthday special (do not miss on February 1, 2), will also feature Jennifer Aniston, who is the chat show host’s guest on Friday.

Earlier, Michelle was a frequent guest on the show during Barack Obama’s time in office and she even co-hosted in 2016. This week, the pair appeared in a sketch in which Ellen took Michelle to CVS to prepare her for life after the White House. The clip has garnered almost 29 million views on YouTube.

Ellen DeGeneres celebrated the 20th anniversary of her coming out in 2017, both on her TV sitcom and in real life. During the celebrations, Michelle Obama recorded an emotional video tribute that aired on The Ellen DeGeneres Show.

‘I wish I could be there in person but Barack keeps booking us on all these vacations. In fact, I think we’ve got a kite-surfing lesson in about five minutes,’

FLOTUS joked in January 2017 while she and her husband were spending the wonderful time after leaving the White House.