Pope Francis believes that arrogance is the most treacherous temptation 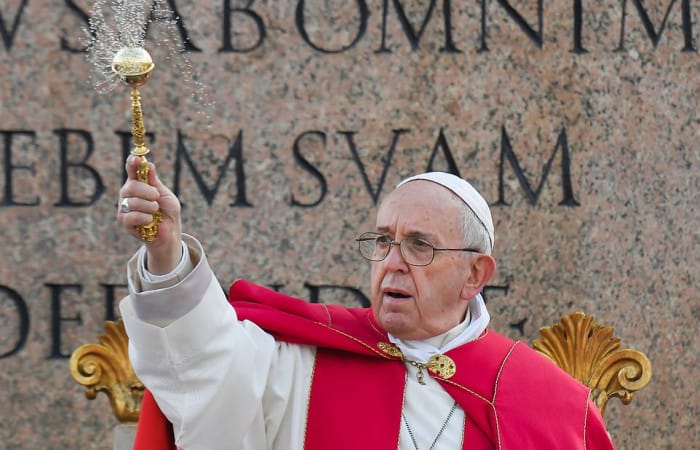 Pope Francis led the celebrations in the run-up to Easter Sunday, during the traditional Sunday mass, he has warned believers that arrogance becomes the most treacherous temptation threatening the  Roman Catholic Church.

Pope Francis, the spiritual leader for millions of the worshippers, led another Palm Sunday Mass and noted that the Roman Catholic Church is facing many temptations but one of the most treacherous is an arrogance. Thousands of the believers have gathered on St Peter’s Square on Sunday morning to meet the pontiff and to listen to his traditional speech.

The Holy Week celebrations are getting underway in the Vatican, thousands of people from around the globe came to the Vatican to watch the religious leader deliver his homily which cautioned Catholics, including top Church officials, from becoming arrogant.

The pontiff has sprinkled holy water over palms and olive branches held by pilgrims and tourists as he led the celebrations in the run-up to Easter Sunday – the most important day in the Christian calendar. Talking to the crowd, Pope said: ‘Joyful acclamations at Jesus’s entrance into Jerusalem, followed by his humiliation. Festive cries, followed by brutal torture. This twofold mystery accompanies our entrance into Holy Week each year.”

Pope Francis asked people not to forget about the compassion

The two-hour traditional Palm Sunday Mass was ended by the unexpected rain. Pope Francis asked the crowd to pray for peace around the world but particularly the Holy Land and the Middle East.

After the blessing, the pontiff, wearing red robes and cradling a braided palm, joined a procession to an open-air altar to celebrate Mass. By the end of the ceremony, rain was starting to fall but the crowd had swelled to 50,000 people, according to security officials.

According to the old tradition, Palm Sunday marks the day the Bible plots Jesus’s ride into Jerusalem where he was hailed by the crowd as a Messiah, only to be crucified days later.