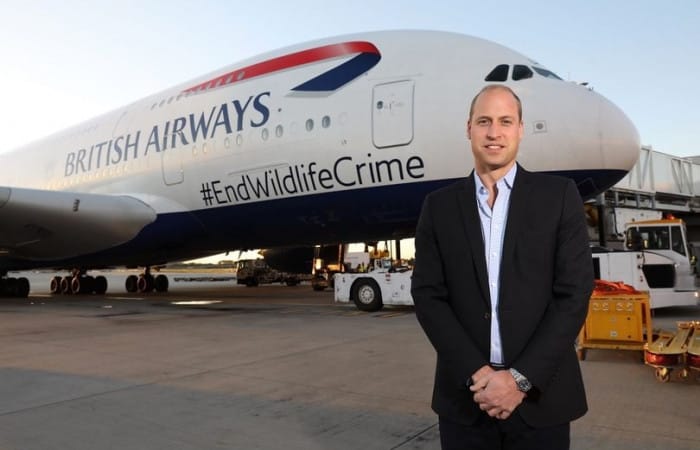 Prince William is on a two-day tour of Namibia, where the focus will be on the illegal wildlife trade, building coalitions and closing down markets for illicit wildlife products, Mirror reported. Upon his arrival in Namibia, the royal was presented with the statue of rhino.

The grandson of Queen preferred for his African tour the British Airways, William flew in an A380 aircraft as he set off for a trip to Namibia, Tanzania and Kenya as part of his role as the royal patron of Tusk. There was a hashtag on the plane’s livery #EndWildlifeCrime.

Prince William became a patron of the Royal African Society (RAS), and this his visit comes ahead of the UK government-hosted international conference on the illegal wildlife trade set to be held in October.

‘Like so many others, I am deeply saddened by the numbers of elephant, rhino and pangolin who have been illegally slaughtered for their tusks, horns and scales. But the illegal wildlife trade also has a devastating human impact,’

Duke of Cambridge said and added that African communities see their tourist livelihoods threatened, and the proceeds of the illegal wildlife trade fund broader criminal networks and threaten security.

Prince William believes he should commit to doing what he can to help end this terrible, global crime.

‘This will be a particular focus of my upcoming visit to Africa, and of course the conference on the illegal wildlife trade taking place here in London in October,’

The Duke of Cambridge met with Namibia’s Vice President Nangolo Mbumba on the first day of his tour, the royal highly appreciated the warm welcome from local authorities and wildlife activists.