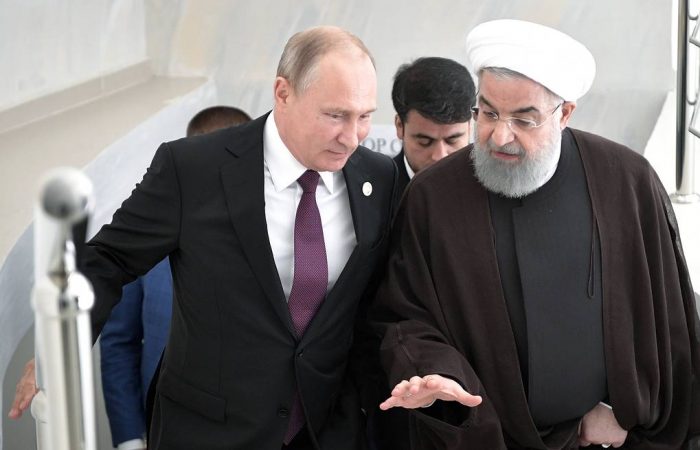 Vladimir Putin and his Iranian counterpart will hold a meeting on Tuesday, MehrNews reported. Both leaders will discuss the latest development on the sidelines of EAEU summit in Armenia.

The Eurasian Economic Union (EAEU) Summit’s agenda includes the address od Hassan Rouhani. Yerevan welcomes the high-ranking political and economic delegations from many countries, so, a meeting of Putin and Rouhani looks logical and natural. Both politicians are sharing the latest development on the settlement of the Syrian conflict.

According to the summit’s agenda, Mr Rouhani will address the summit at 4 PM. The Iranian leader reminds that his country recognizes its responsibility for maintaining the peace and stability in the region.

Prior to heading Mr Rouhani for Yerevan summit, Iran’s Chairman of the Chiefs of Staff of the Iranian Armed Forces made the remarks while addressing a national gathering of commanders and staff officials of Iran’s Islamic Revolution Guards Corps (IRGC) on Monday.

Baqeri said that enemies have understood that the Islamic Iran enjoys the readiness, determination and courage and «will not hesitate to defend its ideals, land and people».

“At the present time, the Islamic Republic of Iran, as a superior regional power, recognizes its responsibility for maintaining regional security and stability and plays a basic role in this regard… it does not think about … waging war and sowing insecurity and seeks calm and tranquility through regional cooperation,” the top Iranian commander noted.

The IRGC’s Aerospace Division made the impressive progress, so, the reinforcement of Iran’s defense, missile and drone capabilities, showing off the full preparedness to counter the enemy’s threats.

The anti-terrorist operations have destructed the last bastions of the terrorists, while the downing of an intruding US drone demonstrated only parts of the might of Iran’s AF and the Islamic establishment.