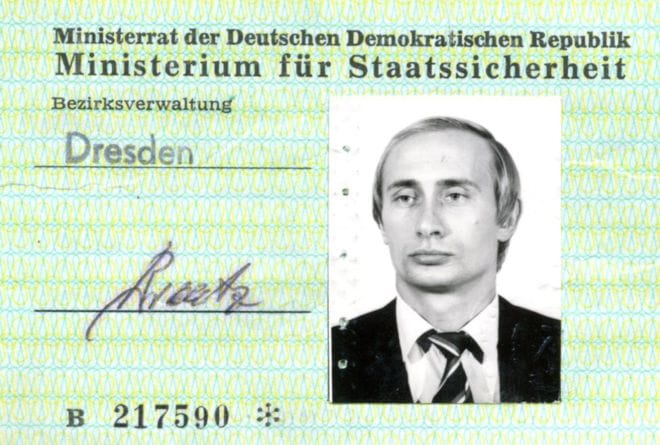 The pass for “Maj Vladimir Putin” was discovered in Stasi archives in Germany, Bild reported. The Russian leader was a Soviet KGB officer who served in Dresden in the 1980s.

The surprising document was found among Soviet-era personnel files in Germany during the inventory of Stasi archives. The pass ID bore stamps and was validated through 1989. The photograph of the identification pass shows us the young Vladimir Putin. Stasi was actually the nickname for notorious East German Ministry of State Security agents.

The Stasi Records Agency said that Herr Putin “received the pass so that he could carry out his KGB work in co-operation with the Stasi”.

Some of Putin’s most formative years were spent in Dresden, the 1980s is a period of time, details of which still remain secret. For young KGB officer Vladimir Putin, arrival in the Dresden in the mid-1980s was his first foreign posting as a member of The Committee. In fact, everyone knows that Putin was a KGB officer, it is an integral part of his biography. His spokesman Mr Peskov shrugged off the emergence of Mr Putin’s old pass. “The KGB and the Stasi were partner intelligence agencies so you probably can’t rule out an exchange of such identity cards,” he said.

According to The Stasi Records Agency, there are other interesting documents, which link current mighty Russian persons and East German Ministry of State Security. Among the photographs and secret police identification card from archives, the experts could see other prominent Russian officials, such as the chief of the defence manufacturer ROSTEC, Sergey Chemezov, and the Transneft head, Nikolay Tokarev, served in Dresden alongside Putin. Definitely, KGB taught many useful skills to its agents if they could reach such a hights and boost their careers after USSR collapse.