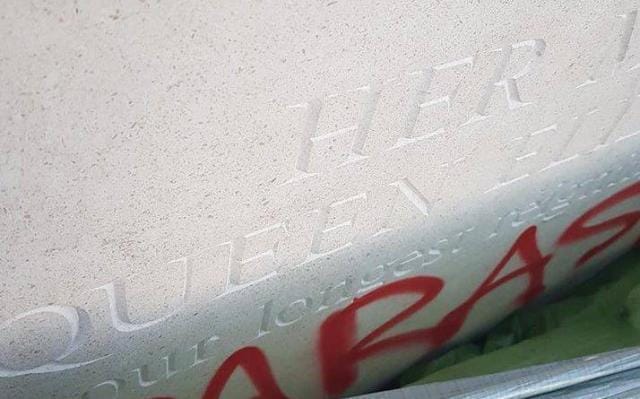 The monarch’s statue was targeted by anti-royals who wrote “parasite” on the stone of statue erected in St Andrews Gardens. The anti-royalists made another disgusting move, they vandalized Queen Elizabeth II’s statue, the pranksters wrote a graffiti that scan “parasite” in an exceedingly red paint is scan at all-time low of the sculpture.

In 2016, a tribute to the monarch price $292,968 that was commissioned in 2016 to celebrate her 90th birthday and as a commemoration of the world’s longest powerful monarch. Gravesend Borough Council is going to restore the statue, which was was sculpted by Douglas Jennings who also created the memorial statue of Squadron Leader Mahinder Singh Pujii, in the same gardens.

In fact, this statue was vandalized twice by pranksters since its unveiling two years ago. The sculpture was once photographed with a cone on its head.

A number of social media users believe that the action was inappropriate, there’s no excuse for wanton harm.

“It is a mindless criminal act and we have passed the information to the police who are investigating it. We are currently waiting for the professional stone mason that installed the plinth to advise us of the best way to remove the graffiti without damaging the beautiful Portland stone,”