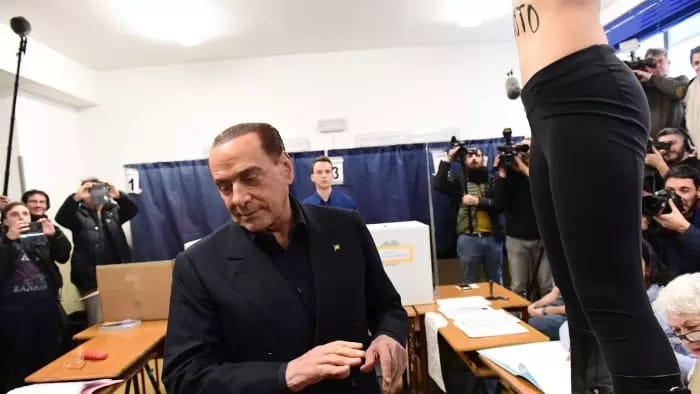 Silvio Berlusconi, the 81-year-old Italian politician, would likely be kingmaker again of a centre-right coalition. After Italy’s national elections on Sunday, he announced his candidate for prime minister post.

Mr Berlusconi, a three-time prime minister had previously hinted that European Parliament President Antonio Tajani would be his favoured choice for the post. The choice could put Berlusconi on a collision course with his Europhobic allies, particularly with League leader Matteo Salvini who has prime ministerial ambitions of his own.

Always smiling Berlusconi said on Canale 5, one of his TV networks:

“I am pleased to be able to announce the good news that the current president of the European Parliament has made up his mind and indicated that he is willing to lead a future centre-right government.”

Salvini, Tjani: who will be Italy’s PM?

However, Berlusconi’s claim evaporated as his Forza Italia party was beaten by its rightwing coalition partner, the Northern League. Matteo Salvini, the League’s 44-year-old leader, presented himself as a revolutionary ally of the angry, the young and those disaffected with traditional politics — some of the same characteristics that Mr Berlusconi presented when he entered politics in 1994.

Berlusconi, the media tycoon, is banned from holding political office until 2019 after a fraud trial conviction related to his private broadcaster Mediaset. He thrust himself back into the political arena ahead of the election by pledging to beat back the “populist wave” of Five Star. But political analysts said private polls last week had started to indicate that Mr Berlusconi’s momentum was ebbing.