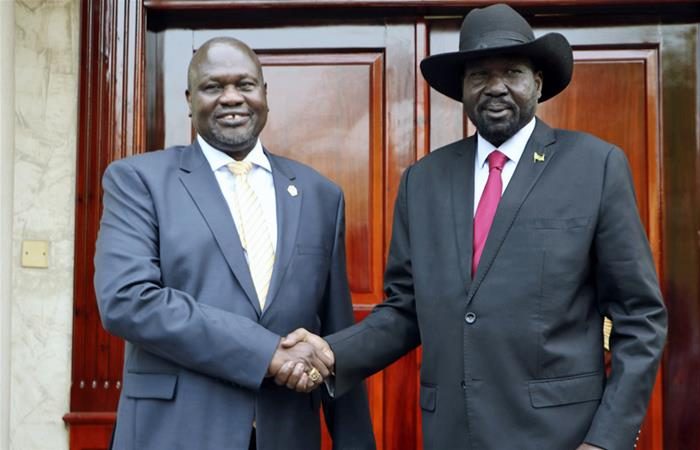 South Sudan’s Salva Kiir unveiled a new cabinet, News24 reported. On Thursday, the key ministers to the latest power-sharing government were appointed by the nation’s leader. The top officials, thus, have formed new govt with rival-turned-deputy Riek Machar in a bid to bring peace to the African young nation.

Following Salva Kiir was sworn in as vice president of government, the people have hope for ending the exhausting armed conflict. In South Suadn, rebel leader Riek Machar became vice president in South Sudan as the country reeling from civil war tries to form a coalition for the third time.

On Thursday, a presidential decree was read out on state TV channel, naming the 34 ministers and 10 deputies. The announcement followed weeks of negotiations between Kiir and Machar over the make-up of the unity government they announced on 22 February in Juba.

Kiir and Machar, old foes whose fall out in 2013 sparked the civil war, reunited in government after intense international pressure to settle their differences and deliver a lasting peace to their young, conflict-torn country.

It is important to note, that South Sudanese defence minister is female now. The most notable appointees is Machar’s wife Angelina Teny, the top defence official and the first woman to hold the powerful position in the African country.

The cabinet will be sworn in at a later time.

The old foes, Kiir and Machar, have agreed on the new Cabinet

In fact, it is the third time they have governed together with Kiir as president and Machar as deputy since the country’s hard-fought independence from Sudan in 2011. The two politicians used to be rivals and had taken nearly three weeks to agree on key appointments in their recent coalition.

Their last two political alliances collapsed into bloodshed, prolonging a conflict that left 380,000 of their countrymen dead, millions displaced and an economy in ruins. But it took another 18 months for the pair to agree on the terms of peace, and come together in government.