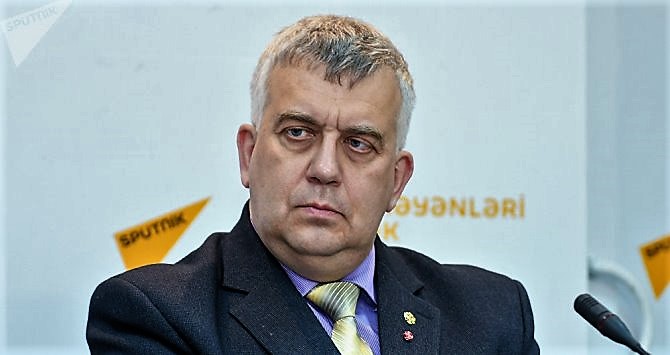 The problem of glorification of Nazism in a single country cannot but affect its neighboring states and other countries around the world. Historical facts, which sound ever more often from high rostrums as examples of unacceptable actions in domestic politics, prove that the threat of repetition of world tragedies doesn’t come from peoples, but from manipulations of politicians who use power for their own purposes. They form the basis of inhuman ideologies, when millions of people die for the sake of abstract ideas that support these ideologies. Humanity has known many monstrous regimes and they all justified their crimes with ideology.

The Nuremberg Trials have always stood and will always stand in the way of the revival of Nazism and aggression as state policy in our day and in the future. Their results and historical lessons, which cannot be forgotten, let alone revised and reassessed, should serve as a warning to everyone who sees themselves as the elected “rulers of destinies” of states and peoples. The purpose of the international trials in Nuremberg was to condemn the Nazi leaders – the main ideological inspirers and leaders of unjustifiably cruel actions and bloody atrocities, and not the entire German people. In this regard, the British representative at the trials said in his closing speech: “I repeat again that we do not seek to accuse the people of Germany. Our goal is to protect them and give them the opportunity to rehabilitate themselves and earn the respect and friendship of the whole world. But how can this be done if we leave in its midst unpunished and uncondemned these elements of Nazism that are mainly responsible for the tyranny and crimes and which, as the tribunal can be sure, cannot be turned to the path of freedom and justice?” It is the duty of any historian to preserve the facts that are a warning to future generations. Until recently, Nazism was remembered in the world mainly in connection with World War II. This definition has remained in our political vocabulary. What meaning do we put into it today? How accurately does it reflect our current reality? What do those who skillfully manipulate the consciousness of their people hide behind it? This is the question that Russian military historian Oleg Kuznetsov poses in his book The state policy of the glorification of Nazism in Armenia. This book is not a political bestseller. The various historical facts and documents presented in it are not meant to accuse the people of Armenia of manifesting Nazism, but to urge them to exclude the politicians of that country from the state policy of falsifying historical facts that make it possible to manipulate ordinary citizens.

The ideology of a Nazi regime, regardless of the country where it originates, carries the same foundations. One of the most terrible stages of state Nazism is the extreme manifestation of the idea of ​​racial superiority driven to fanaticism, and the creation of myths that heroize those who, even being Nazi criminals convicted during World War II, are beneficial to politicians adhering to Nazi ideology. In his book, Oleg Kuznetsov writes: ”Glorification in various forms of Nazism in Armenia through memorialization of memory of the Nazi criminal Garegin Nzhdeh and his openly racist theory of the tsehakron, the doctrine of the Armenian superman, is the subject of a purposefully and systematically conducted state policy. Therefore, we consider it important and necessary to explain why the Armenian authorities and the Armenian diaspora have made such serious efforts in recent years to exalt the personality of Garegin Nzhdeh, and not someone else from among the Armenian nationalists who more contributed to the appearance of the Republic of Armenia on the political map of the world than Nzhdeh.”

It’s well known that over the past few years Armenian state representatives in the UN have always voted for resolutions opposing any manifestations of Nazism in the world, while the political leadership of their country is openly installing monuments to the Nazi criminal Nzhdeh in Armenia’s cities, renaming avenues, streets and squares in his honor, instituting state awards of his name. The country provides financial support at the state level for the creation of a number of television programs, films, and the publication of books telling about the ‘deeds’ of a man who actively collaborated with Nazi Germany during the war. From March 1940 to September 1944, Nzhdeh was a paid agent of the SD, and this is recorded in documents in the archives of the secret services of Russia, Armenia, Azerbaijan, Georgia and Bulgaria. It is these actions, which, speaking in the language of the corresponding UN General Assembly resolution, are ‘glorification of Nazism’, can become the new historical stages for Armenia, which will lead not only its people, but also its neighboring states to tragedy. This is what Kuznetsov says about the root causes of this:

”…a different hero was needed to form and personify the new ideology of the Armenian national identity in the post-Soviet era. Official Yerevan decided to proclaim Garegin Nzhdeh in this capacity, and this choice was largely determined by the struggle for power within Armenia, and not by ideological reasons. This process began in 2000, when Andranik Margaryan, the organizer and first leader of the Republican Party of Armenia created according to Nzhdeh’s theory of tsehakron, was appointed Prime Minister. At that time, there was a fierce internal political struggle in Armenia between supporters of the country’s first president Levon Ter-Petrosyan and the second president of the country Robert Kocharian, who removed him from power. The reason for the crisis was the position of the first of them in negotiations with Azerbaijan on the Nagorno-Karabakh settlement, which implied the return of the most of the occupied lands outside Nagorno-Karabakh to Azerbaijan without any preconditions.”

Ilham Aliyev, president of Armenia’s neighbor Azerbaijan, has repeatedly expressed concern about these facts. Recently, at the summit of CIS countries’ defense ministries, he not only supported Russia’s course of combating Nazism and neo-Nazism on a global scale, but also expanded its scope, pointing to Armenia as a country of Nazi victory. But the fact remains that the new leaders of that country, headed by Prime Minister Nikol Pashinyan, cannot or do not want to radically change the situation in Armenia. Today, Armenia is in no hurry to eliminate the Nazi legacy of its former leadership, thereby demonstrating adherence to the practice of glorification of Nazism, which existed in Armenia before the coup d’etat that took place two years ago.

In Europe, Oleg Kuznetsov’s book is compared with the 1995 address of the famous Italian writer Umberto Eco to the participants of a symposium at Columbia University in New York dedicated to the anniversary of the liberation of Europe from Nazism. In his report, Eternal Fascism, he warned the world that the threat of fascism and Nazism in the world persists even after the end of World War II. Five years ago, his words were remembered during the UN General Assembly, which adopted a new resolution: “The fight against the glorification of Nazism, neo-Nazism and other practices that contribute to the escalation of modern forms of racism, racial discrimination, xenophobia and related intolerance”.