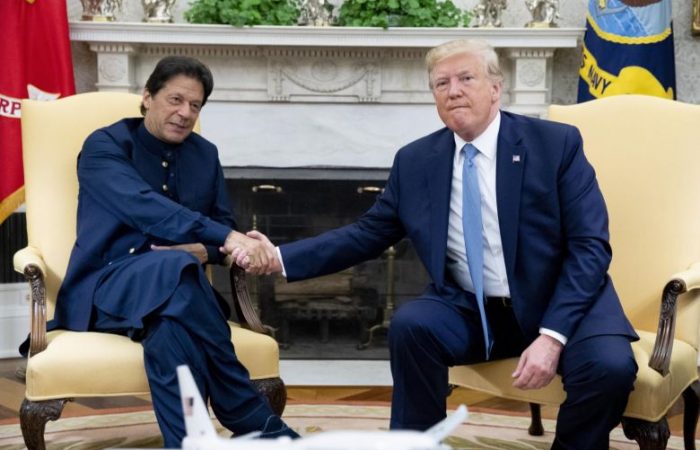 Donald Trump and Imran Khan have met for the first their bilateral meeting in the West Wing of the White House. On Tuesday morning, President Trump welcomed in the Oval Office Pakistan prime minister in an effort to mend the relations, CNN reported.

In contrast with his more than modest Saturday’s arrival to Washington, Imran Khan received an official welcome on Monday at the White House. President Trump greeted Pakistan PM in front of the West Wing before a bilateral meeting.

On July 22, both leaders have met again in the Oval Office for their first official bilateral meeting. The central topic of the discussion was the anti-terrorism fight and resuming the financial aid from the United States.

Last year, Donald Trump accused Pakistan’s leaders of «nothing but lies & deceit» on Twitter. After taking the PM office, Imran Khan as PM does his best in an effort to mend relations and seek help in ending the war in Afghanistan.

Talking to Pakistan PM, President Trump gushed about the prospect of improved political and trade relations with Pakistan, adding his expectations that Mr Khan would help the peace process in Afghanistan.

«I think Pakistan is going to help us out to extricate ourselves,» trump concluded during briefing with reporters from both countries.

Despite it’s critical for Washington to maintain a long-term partnership with Islamabad and not cede the region to Beijing, trump continues to press Khan over the weak anti-terrorist campaign.

The White House acknowledged as well that promises of help in the all-Afghan peace process from the previous Pakistani government had failed to materialise.

President Trump has repeatedly said he wants to withdraw US forces from Afghanistan and end the nearly 18-year war. During Monday’s working lunch with Khan, the American leader was more optimistic about cooperation, even as he suggested that he always had military options if diplomacy failed.

«I could win that war in a week. I just don’t want to kill 10 million people,» Trump said, describing what he said were prepared military plans in Afghanistan. «If I wanted to win that war, Afghanistan would be wiped off the face of the earth. It would be gone in 10 days.»

Imran Khan was repeatedly praising Trump for his leadership.

«He has now forced people to end the war, to have a settlement,» Pakistan PM said of Trump. «This is a critical time.»

Pakistan PM hopes for improving relations with the US

US officials said last week that the president’s meeting with Khan was an attempt to repair relations between the two countries, though they said the Trump administration remained «clear-eyed» about the continuing links between Pakistan and terrorist groups.

Earlier, PM Khan has accused past Pakistani rulers of selling themselves short and kowtowing to American dictates. But before the meeting in the Oval office, Khan had said he wanted a reset in the bilateral ties.