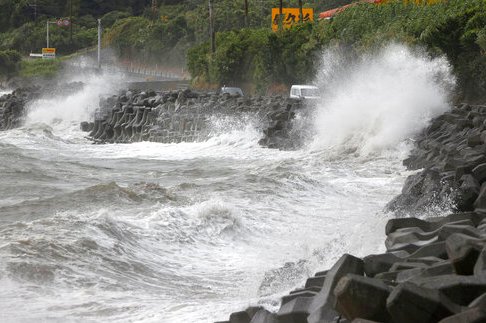 On Monday morning, the storm system was 110 kilometres north of Tsushima and heading towards South Korea at a speed of 40kph.

As the local authorities report, four people are missing in Japanese prefecture Miyazaki, after the building they were in was swept away in a landslide. Another 35 have been injured in the region and 400,000 homes remain without electricity. The rescue team have already evacuated almost 1,000 people in South Korea.

Meantime, millions of people have been told to evacuate, it is unlikely they will all head to evacuation centres. Those close to rivers and in low-lying areas are likely to be at most risk. In addition, some evacuation centres have turned people away in order to prevent COVID-19 infections.

The region is still recovering from heavy rains and flooding in July that killed 83 people.

Haishen is the second major storm to hit the region in a week and is bringing sustained winds of up to 90 miles an hour, devastating crops, disrupting travel and bringing heavy rains to a region vulnerable to flooding and landslides.

At its peak, gusts of more than 200 kilometres per hour hit Nomozaki in Nagasaki Prefecture. On Tsushima island, situated in the Sea of Japan halfway between Kyushu and South Korea, wind speeds his 155kph.

Typhoon Haishen is the second big storm system to smash the Korean peninsula in a week after Typhoon Maysak left at least two dead and thousands without power.

On the southern tip of the Korean peninsula, almost 5,000 households were without power this morning, including on the resort island of Jeju, which reported more than 473 millimetres of rain since Saturday.

In South Korea, entries to national parks and some national train services have been suspended, the safety ministry added.

According to the meteorologists, typhoon is expected to track near North Korea’s port city of Chongjin, in the far north of the country, late on Monday. In fact, North Korea’s agriculture sector is particularly vulnerable to severe weather, and this summer’s storms and floods have raised concerns over the country’s tenuous food situation.