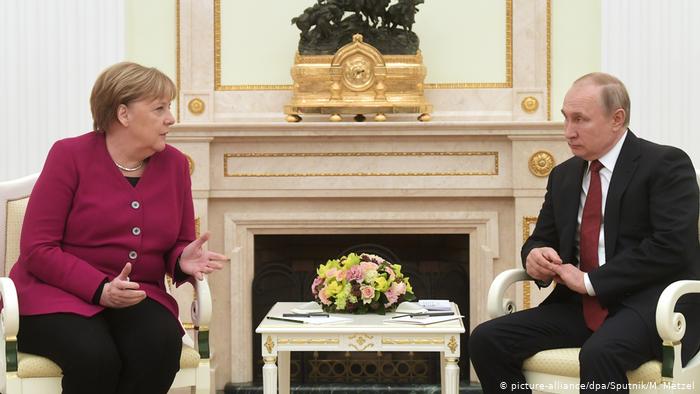 The Russian and German leaders have agreed on the Nord Stream 2 pipeline’s future. The pipeline will start operating to supply Europe with natural gas. Any US sanctions are able to stop the energy project, which is vital for Germany.

German Chancellor and Russian President met in Moscow on Saturday, TASS reported. The leaders have discusses the future of the controversial Nord Stream 2 gas pipeline as well as the latest development in the Middle East.

The pipeline Nord Stream 2 will soon start is operating despite the US sanctions, both leaders agreed. The NS2 is set to deliver Russian gas to Germany, which relies heavily on Russian firms for its energy needs.

Washington has expressed its point of view on this energy project, imposing the sanctions on it. According to Trump administration, pipeline, which belongs to the state oil company Gazprom, could be used as a «tool of coercion» and could make Germany a «hostage of Russia.»

«I hope that by the end of this year, or in the first quarter of next year, work will be finished and the gas pipeline will start operating,» Putin said on Saturday after meeting with Chancellor.

For her part, Merkel said loud and clearly she «does not agree with the US approach» of imposing sanctions, which have already been decried by the German Cabinet for impinging on national sovereignty.

She added that «despite the sanctions it will be possible to complete Nord Stream 2… There is a certain delay but it will be completed.»

During a Saturday meeting between Putin and Merkel, the armed conflict in Libya was also discussed. The pair talked about the security situation in the Middle East and North Africa.

Speaking of the ongoing civil war in Libya, the German politician said she hoped Turkish-Russian efforts to broker peace would be successful and confirmed that Berlin would be the site of upcoming ceasefire talks.

However, Merkel underlined it would be the United Nations, not Germany that would lead the talks. She expressed the hope that Libya could soon become a sovereign and peaceful country.

«This kind of conference can only be the prelude for a longer process,» Merkel concluded.

As for the Ukrainian plane crash in Iran, Merkel said it was an «important step» for Iran to admit that the tragedy on Wednesday had been an «unintentional human error.»