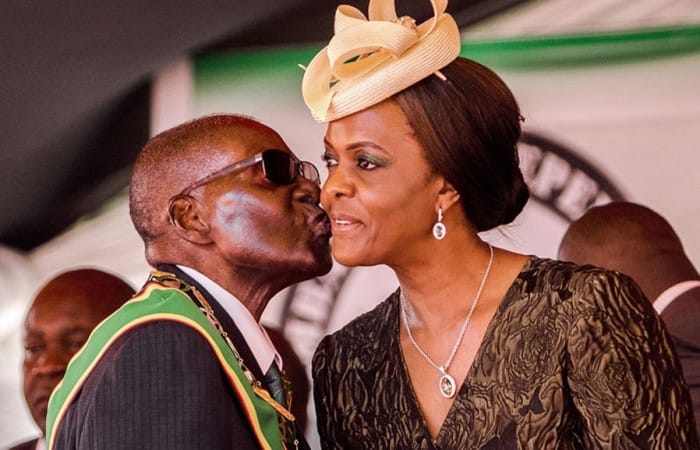 Grace Mugabe’s plans to climb the political top in Zimbabwe failed but where is the first lady now? Her 93-year-old husband President is in Zimbabwe under arrest, while whereabouts of Grace is unknown, she just disappeared.

The political ambitions prompted the military takeover in Zimbabwe on Tuesday, are not entirely clear but everyone understands that 52-year-old Grace played a fatal role in it. There were rumours that Mrs Mugabe had left for Windhoek, the capital of the neighbouring Namibia, but they were denied by local authorities.

Mrs Mugabe as the wife of ousted ruler Robert Mugabe follows in a long line of partners to authoritarian leaders who faced uncertain futures after their regime’s downfall.

Up to Friday, the whereabouts of Grace Mugabe is unknown, Neither has it been possible to stand up reports placing the second wife of President Mugabe in Botswana, Dubai or Malaysia, where the presidential family own property. It is quite possible that the powerful and rich family has properties in other corners of the world.

It seems most likely that the woman tagged “Gucci Grace” because of her shopping habit is still holed up in the “Blue House”, the sprawling mansion in the upscale Borrowdale neighbourhood of Harare, where she lives with the president.

The top military official stated after the takeover that the “family” of Mugabe being “safe” in its custody, as well as the president himself. Another diplomatic official, from the South Africa, added:

“Her future is part of the discussions. The army won’t let her go anywhere until [Mugabe] has stepped down.”

Grace shared President’s bed and the profits from his embezzlement of the national coffers. Like other despots’ wives before her, she spent lavishly on herself and her cronies, a habit that earned her the nickname ‘Gucci Grace’ among Zimbabwe’s hard-pressed citizens.

A reported deal – struck between Robert Mugabe and senior army commanders behind this week’s military takeover – that guaranteed his wife’s safe passage from the country suggests she may yet continue to live in a style to which she is accustomed.

But not every woman who hooked up with a dictator was so lucky. Here’s a look at the varying fortunes of their partners when regime change strikes.