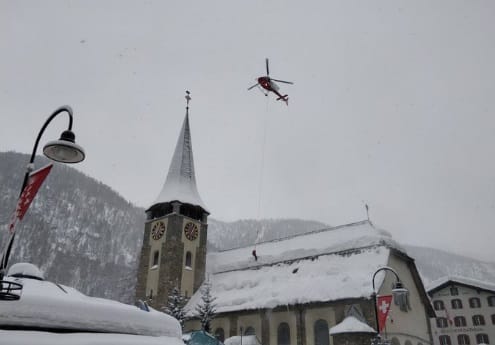 Swiss ski resort in Zermatt suffers from the avalanches and heavy snow, the second time in a row this popular place was cut off from the world for 48 hours.

Zermatt in Switzerland wasn’t the only ski village cut off on Monday morning, Andermatt is in the same situation after rail and road connections were closed. The highest ever avalanche risk made the authorities to stop the connections via railroad. The railway line from Täsch to the car-free village closed on Sunday, the village’s website keeps people informed.

Zermatt and Cervinia, an Italian resort below the Matterhorn, both are snowed-in for the second time in a row in January. Zermatt authorities are requesting that guests trying to travel to village do not come to Täsch or the equally small village Randa, both on the way to Zermatt, but to remain in larger valley cities like Brig and Visp instead while they wait for the roads and railway to reopen.

Where to go when Zermatt ski resort is closed

Zermatt avalanche warnings are at level five, the highest one ever, according to the authorities. That is the reason for stopping road and rail traffic in many parts of the Alps, not only in Switzerland but in Italy, France and Austria. The Institute for snow and avalanche research confirmed the high level of danger in the canton.

“Large avalanches can suddenly be set off and may hit close to inhabited areas. The situation will remain very, dangerous until at least Tuesday,”

Valais police’s statement reads, adding that at the lower altitude where it is raining rather than snowing, the heavy rain may spark small landslides and rockfalls.